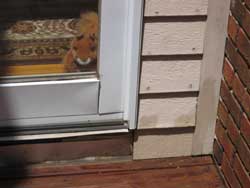 Decks are supposed to be beautiful and they are when designed, installed and maintained properly. Many decks have problems when they were not designed or installed/extended properly, often after as an add-on after a home is built.  When the customer called initially, he was looking for some quick repairs before a party he was planning.

After the party we went back to deal with the source of the problems, and found a nightmare, especially for a house that was only 5 years young. The deck was not flashed properly and that's where the problem started. The siding and doors above the deck needed significant repairs, i.e. we rebuilt the door frames for 2 entry doors and replaced a sliding patio door. Even worse, the water damage traveled 4 to 6 feet into the kitchen requiring that floor to be replaced. Below the deck (photos #3 to 5), the siding, plywood sheathing and siding had to be replaced. The biggest challenge was replacing part of the sill plate that sits between the foundation and the exterior wall framing.

Most decks provide the relaxation homeowners long for but occasionally there are problems. Most often deck problems are found where the deck is attached to the house. Water flows downhill, so precautions need to be taken to direct water from the roof, the siding and sky to travel to the ground without penetrating behind the siding. This requires flashing to be installed under the siding, wrapping over the ledger board (how a deck is attached to the house) and away from the house. When a deck isn't flashed properly, water gets into the wood and if unable to dry out, this creates an environment where wood rot happens.

All 3 of the decks shown below had problems where they attached to the house. What is most interesting is the range in ages – house #1 was more than 100 years old, house and deck #2 where built about 20 years before we repaired the deck and the house where photos #3 to 5 where taken, was just 5 years young. Let's look at each more closely:

One way to avoid these problems is for do-it-yourself homeowners to hire a handyman to install the structural components of a deck while the homeowner adds the flooring and railings. This will reduce the number of decks installed without the proper flashing to minimize water penetration. 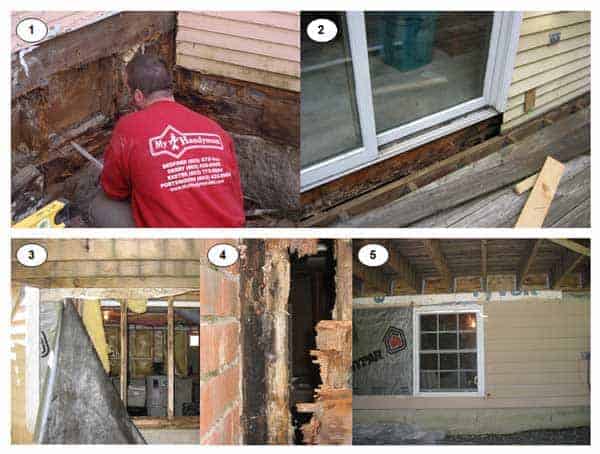 Get More Tips on Exterior Repairs