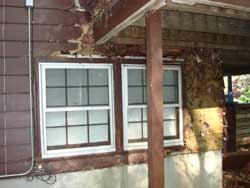 When siding repairs are deferred as the house at left illustrates, the repair costs increase significantly. The home owner claimed they didn't realize the damage was there until finishing a basement bedroom for their daughter … and there was a hole the size of a fist, open to the outdoors?

The problem started with leaves piled several feet high on the deck, trapping water against the siding. We didn't check the ledger board attaching the deck to the house as the deck needed to come down. The entire side of the house had to be rebuilt from the siding, plywood sheathing, insulation through to new sheet rock and more. We assumed we would also find structural damage inside the walls but again, the homeowner decided to defer the work give the cost of repairs. This is unfortunate as ultimately this home could be condemned if the exterior walls can no longer support the weight of the house and roof.

Reasons Why Siding Gets (Stays) Wet and Rots

From the top of your home's roof to the bottom of the foundation, you're home is built to shed water. Most of the time it works exactly the way it is designed an built but sometimes problems occur, often when a homeowner adds a deck or sunroom and drainage isn't handled properly.

It rains and that won't change. Your home should shed the water easily, and moving it away from your home so that your house can dry after it rains. Exterior paint sheds water until there are cracks, peeling paint or gaps between the siding and windows/doors letting rain get behind the surface of the siding. It's the water that penetrates that causes problems because it likely won't get enough air circulation to remove the moisture and wood that has more than 20% moisture will rot.

Let's look at the examples illustrated in the photos below, all needed some type of siding repairs. 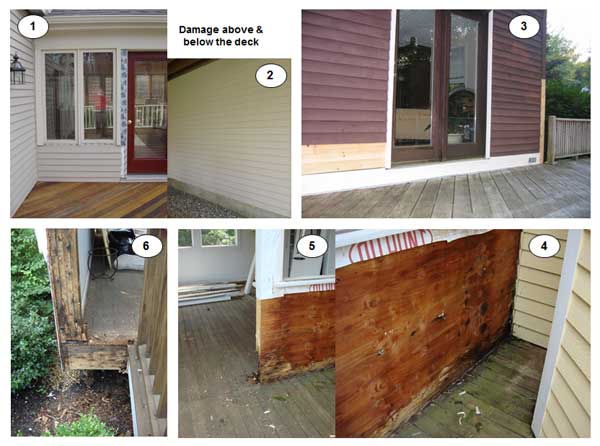 Get More Tips on Roofing & Siding