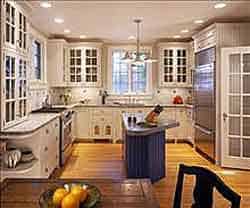 You're wondering how much your remodeling project will cost? You've been thinking, planning and saving to remodel your kitchen for several years and feel you're ready to start. Hopefully your planning has included research into your home's current value and average costs for the type of project you're planning (Remodeling Cost vs Value reports are a great resource).

Homeowners have the opportunity to significantly control your costs. Roughly have the total costs come from the fixtures and features you select — the moldings and other ceiling and wall trim, the flooring and lighting, the cabinets, counter top, hardware and appliances. This article (second of 3) will help you understand how to manage your remodeling project costs.

You Control Remodeling Costs – (Whether You Know It or Not)!

In Controlling Remodeling Costs Part 1, you learned that in more than 50% of the projects studied, (6 of 8 projects), the finishes selected by the homeowner exceeded the labor and material costs of the remodeling projects studied. 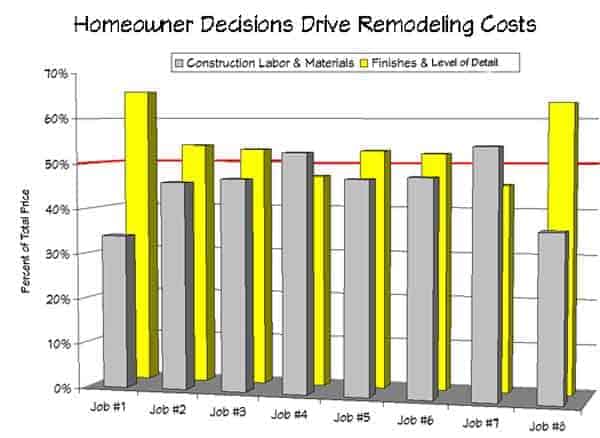 Often when you’re starting a small or even large remodeling job, you bring in different contractors and talk with them about their approach and costs. You always ask “how much will this cost?”  And many contractors will give you a single number although some will give you a range.  But rarely do you really understand what the single number or range means.  A contractor will think about how much labor and construction materials it will take and then he will often double that number to give you a “ballpark” quote.  But as you can see from the chart above, at least in the market where I work, that number will usually underestimate the price of the job.

Sometimes a contractor who is hungry for work, will deliberately lead you to believe that the total job will cost less by underestimating the finish decisions.  At the end he can always (truthfully) say the budget increased because you (the homeowner) chose more expensive finishes than what he budgeted.  But as often as not, the under-estimate results from the contractor valuing “good design” less than the homeowner.  You should always ask what percentage of the “ballpark” price is represented by finishes and details.

More importantly, this type of communication fails to let you know that you’re in the driver’s seat and that the individual decisions that you make about finish and detail level determines the price of the job. Let’s look at a remodeling job where the construction labor and material costs are $75,000.  The total construction price would be $150,000 if the finishes are 50% of the final costs. The same remodeling project would be $215,000 if your choice of finishes and details are 65% of the total construction price — a difference of $65,000!

Personally I'd rather lose work than create misconceptions about price when beginning to build a relationship with a new client. So I show this chart to prospective customers and then give then a “ballpark” in the higher ranges, and explain how their decisions during the design process can raise or lower the price of the project.

“Allowances” in Your Remodeling Contract

After you’ve signed a contract for a remodel but leave finish decisions to later, the contractor will put “allowances” in the contract to cover the price of the fixtures and finishes.  Often, he will include what are called “builder grade” fixtures and finishes in the allowances.  So the allowance might be for a $50 delta faucet from Home Depot but what you have in your mind is a $500 KWC special order faucet.  All these individual decisions can add thousands or tens of thousands of dollars to the final price.  And create incredible friction between the contractor and the homeowner.

Very few of us are indifferent to what remodeling costs.  Going over budget can permanently diminish the enjoyment you get from the improvements you’ve made to your house.

I will not begin work on a remodel without fleshing out the design. With a fully detailed design, you can begin the process of remodeling with a high degree of precision about the final project costs. I’m rarely more than 2% over-budget on a job.  Yes, the detailed design costs more but in my experience, it saves money – sometimes a lot of money — in the end.  It’s much easier to control costs at the design stage than after the majority of the framing and rough in plumbing and electrical have been completed.

A detailed design can dramatically reduce the cost of changes and additions. After you’ve closed the walls with drywall, it’s really expensive to move or add a light fixture. It’s cheap or essentially free, to change light fixtures or the location of other features at the design stage. If the original finishes are too expensive at the design stage, then other less costly finishes can be used to give a sense of drama or elegance, at a lower cost. When the decision is delayed to the finish stage, the only choices are to downgrade the look or blow the budget.