You've probably changed a few HVAC air filters, but have you ever taken a tour of your HVAC system and learned how it works? Your roof and HVAC system are the two most important components of your house. Learning about my system during an emergency HVAC installation was extremely stressful and not something I'd recommend you try. Chance are you haven't and learning about heat pumps was new for me too.

I grew up in the northeast where we use furnaces and hot water baseboard heating systems. I've also put radiant heat into floors using copper in my Portsmouth house and electric wiring in my Hampton, NH condo. In Arizona I had to learn about heat pumps and was glad to watch everything during our recent HVAC installation of a new Trane system.

This series of articles chronicles one very busy day where 2 installers from a Phoenix, AZ company successfully completed the installation of a split heat pump. , with temperatures reaching 110º Fahrenheit. The articles will cover: 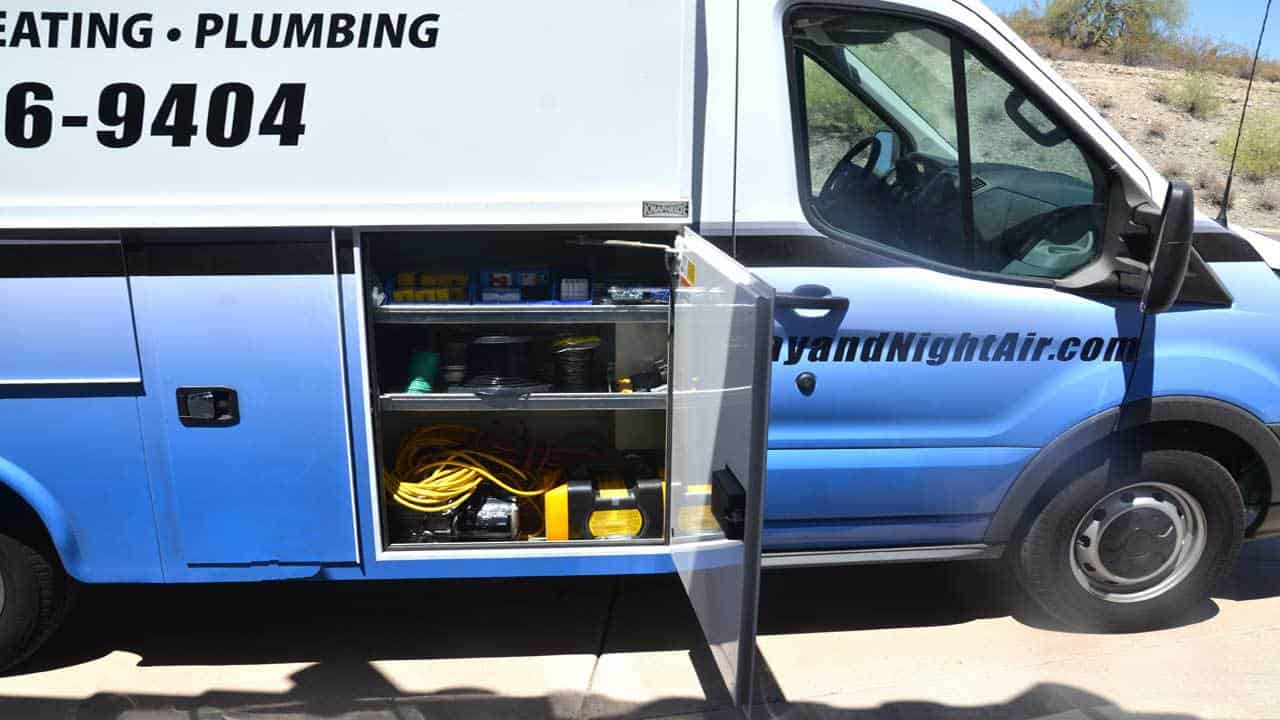 The first to arrive was the lead installation tech, John. He started setting up by carrying tools into the garage, including a fan to help him deal with the heat which went above 110º Fahrenheit. What was pretty impressive was the number of people and trucks that arrived in quick succession, to make the job move along quickly and efficiently.

Note: In talking to the delivery driver, he told me we were the first delivery of the day. He had 8 more systems on the truck, and then a second route. His company has 7 trucks doing nothing but Trane deliveries so with some contractors picking up units at the warehouse, there are more than 100 Trane systems being installed daily in the Phoenix area.

It was challenging bouncing back and forth to keep track of parallel install activities in the garage and the backyard. But describing the flow of HVAC installation tasks will be easier to understand by listing the outdoor activities first, then moving indoors.

#1 – Refrigerant recovered from the system. This step has to be done carefully to prevent any freon from escaping into the atmosphere. In fact freon production has been cut by 90% to meet US commitments to the Montreal Protocol (explained in The R-22 Freon Pricing Story Not Being Told).

#2 – Electricity shut off with the outdoor disconnect switch. This is a special switch located next to the condenser, making the work safer as contractors don't have to go off to find the electrical panel.

#3 – Insulation removed and copper wires cut (called lineset) in order to remove the old condenser. The new HVAC installation will use the existing copper wires running through the walls of the house.

#4 – Electrical wires removed from the house and the condenser.

#6 – Replaced disconnect switch to insure the box is air and water tight, with rubber bushing to prevent wires from touching the metal box. The flow of electricity is interesting:

#7 – Old condenser boomed out, and new one boomed in over the garage and positioned on the concrete pad. The new condenser is taller than the old one, with a smaller footprint. This is good for dissipating the heat carried outside by the refrigerant. I've been told the spacing should be at least 12 inches (2 feet on one video) around all 4 sides.

#8 – Measured opening to locate new condenser in the center of the space.

#10 – Copper pipes are connected by brazing (higher temperatures than soldering used for plumbing copper) with nitrogen running through the pipes.

Let's head into the garage so I can share the steps taken to install the new air handler, and everything associated with it.

#1 – Power turned off by unplugging the air handler (regular outlet).

#2 – Insulation and metal covers taken off the old air handler.

#3 – Evaporator coil and blower motor removed from the air handler cabinet, and placed out by the street.

#4 – Air handler cabinet pulled out, and also moved to the street.

#5 – Old plenum between the air handler and the ductwork removed.

#6 – New, custom plenum built and installed, with a flex connector that makes it easier to move the new air handler cabinet into place.

#9 – Air handler moved into place and evaporator coil and blower motor placed into position, inside the cabinet.

#11 – New condensate safety switch installed. If the condensate line ever gets clogged, it will turn the system off so it doesn't overflow.

#14 – Build condensate line with white PVC pipes, so that water released during the cooling process can flow out of the house using gravity. A bracket was added below the floor of the air handler and zip ties used to secure all the parts outside the air handler cabinet.

Once all the copper piping has been brazed, it's time to test the system to insure there are no leaks which will prevent the system from operating with optimal efficiency. Here's the sequence of tests performed: 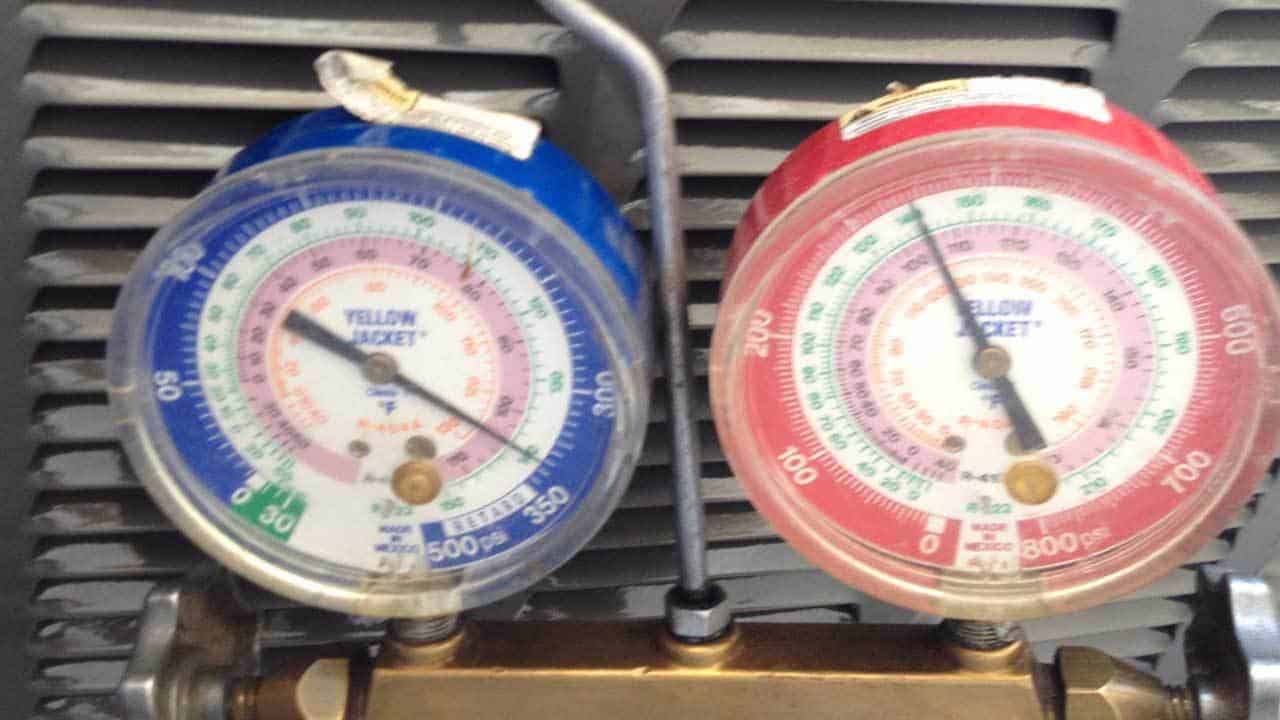 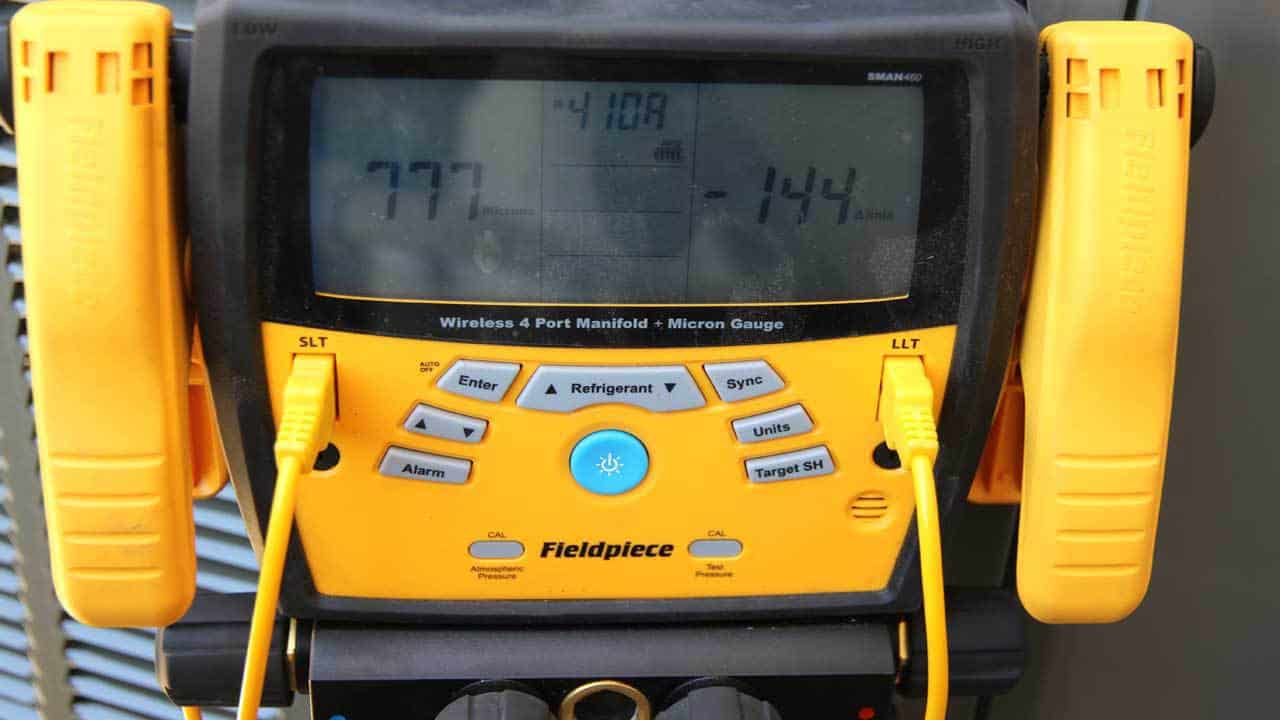 #1 – Pressure test run at 340 lbs using an analog pressure gauge. The system is off and filled with nitrogen. This test is run for 30 minutes to confirm that the pressure is maintained the entire time. The larger 7/8th line is tested first, then the smaller 3/8th line.

#2 – Vacuum test is run, after switching to a digital pressure gauge. They test for really small leaks (below 300 microns) and then flush the lines to clean out any contaminants not removed with the nitrogen.

#3 – Calculate, weigh and add new 410-A refrigerant to the system, to complete the installation.

#4 – Final details addressed by the team included a new intake grill, filter and replacing a section of flexible ductwork in the attic.

Get More Tips on Heating & Cooling