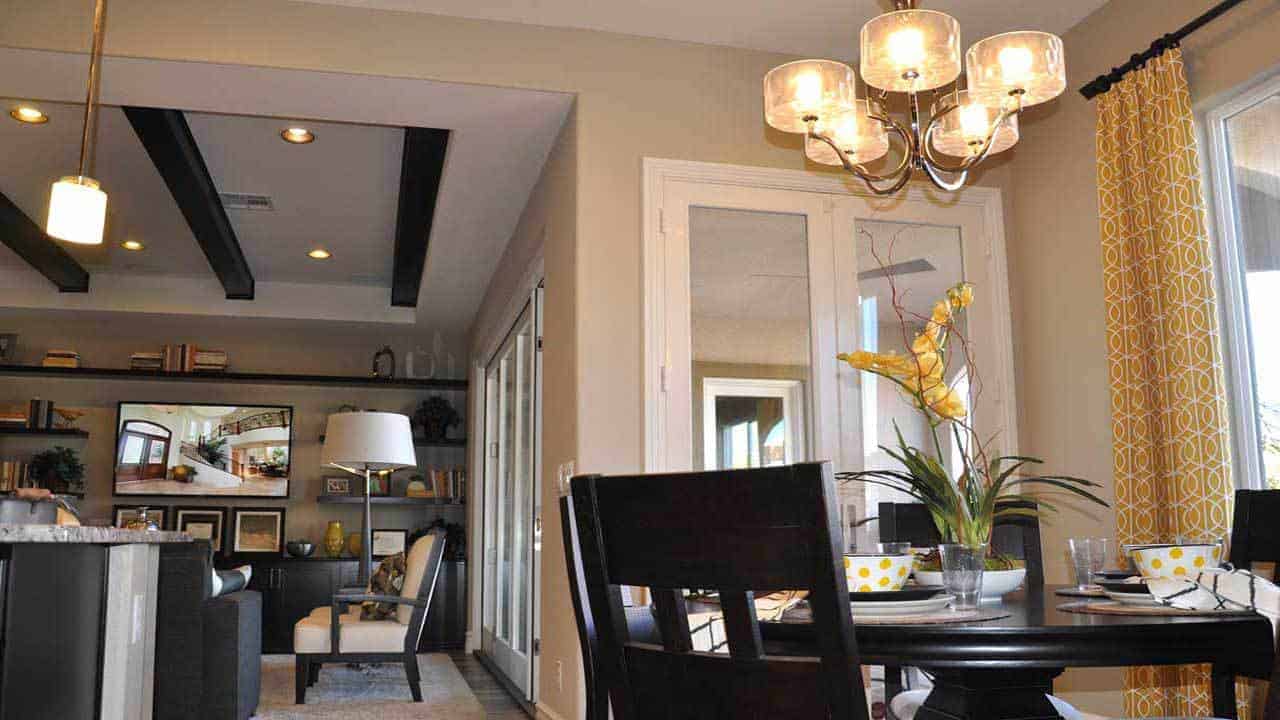 Most ceiling colors are white, or at least that's what they've been for a hundred years. One room or two rooms might have a tray ceiling, or in older houses a medallion for decoration but until recently we haven't given ceilings a lot of attention. That's beginning to change, and here's one reason why.

The open floor plan is becoming a standard feature in most new houses, and a key component of many remodeling projects. This open space combines two, three or even more rooms, to create one huge space. You notice how big and spacious this new room is visually, adding not only the square footage from each room, but also the space once allocated to surrounding hallways.

This big space is visually appealing but it can also be overwhelming for many people. So where we once decorated the walls of these rooms, we're now decorating the ceilings to define the individual living spaces that make up the larger living space. (Read: Interior Trim Series: Ceilings That Pop) 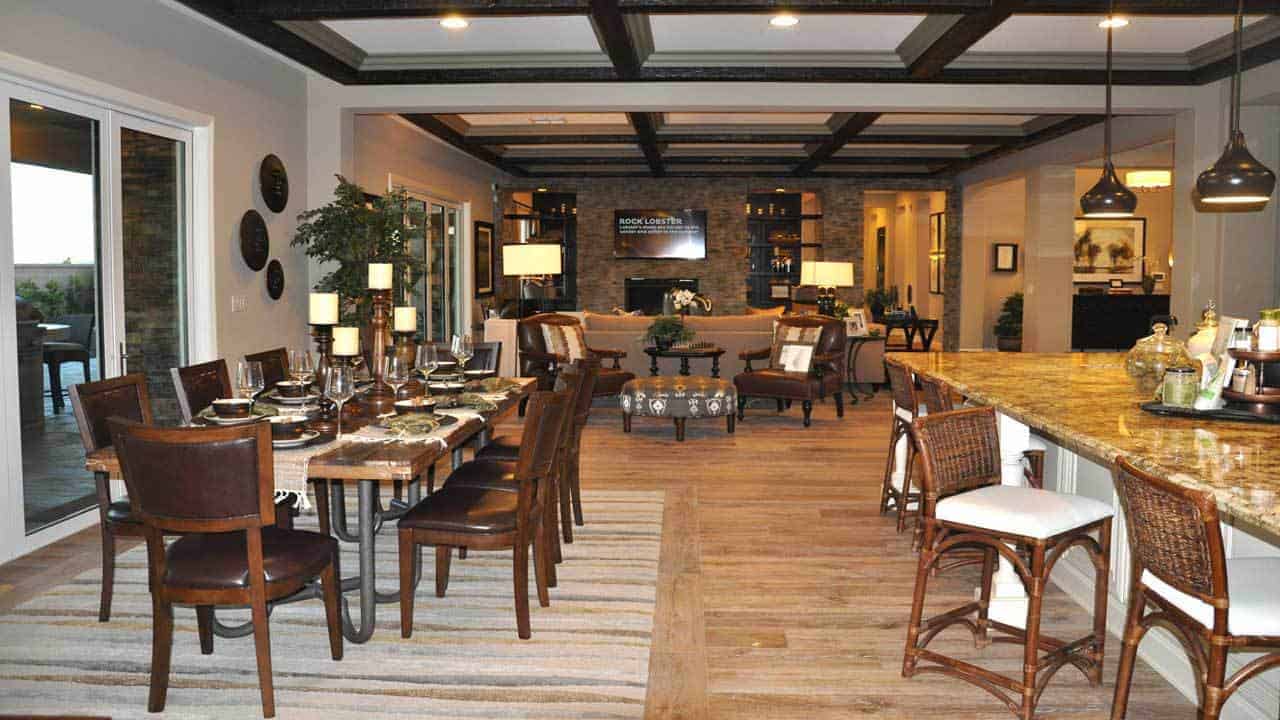 Ceiling colors are just one way to break up huge ceilings that result from open floor plans. Ceiling heights can vary by bumping up into the overhead space, or by adding different types of trim below the drywall. With my handyman business, we often recommended adding trim to a homeowner's ceiling, to avoid having to paint several rooms after repairing a water leak in one section of the ceiling.

Notice how the square trim above, defines the family room space at the rear, as well as the dining space in the foreground. The same ceiling trim is used for both areas, and it's separated by a section of ceiling that's white. You might think it's breaking up the individual living spaces which it is, but there's also a load bearing beam in that ceiling.

In this house, the same ceiling colors (white with dark trim), were used in each living space. Where the dark trim might have seemed heavy above, here you can see how it matches the kitchen cabinets in color and style, tying the room together nicely. 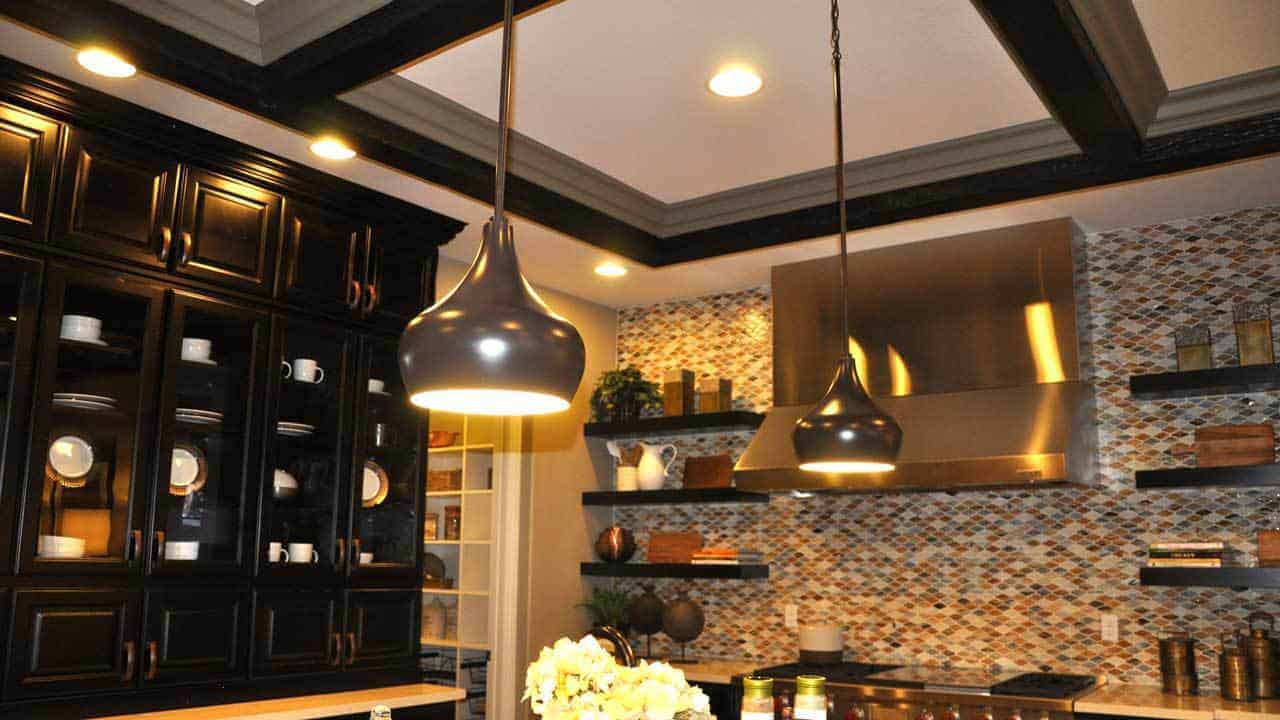 Rooms You Can See From the Front Door

Amazingly we still focus a home's design around the front door, although that's shifting to making the kitchen the heart of every house. What began with combining kitchens and family rooms, is growing bigger with more and more rooms joining the open living space at the center of the house. Here are just a few examples of rooms seen from the front entryway, that use ceiling colors and trim to define their boundaries.

Here's a living room with two open walls, to the left of the entryway as you walked towards the kitchen. 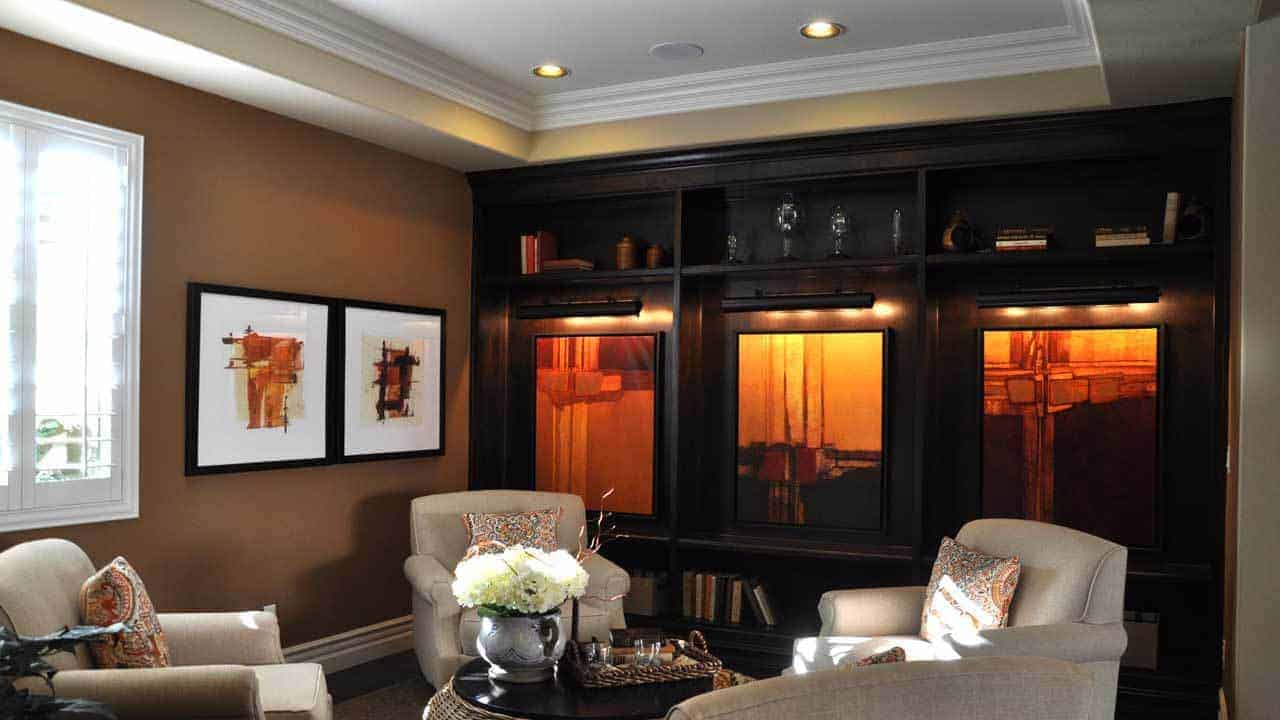 This home office was also on the left, as you entered this home. An interesting feature in this room were partial walls. Instead of removing an entire wall, the two open walls had maybe one-quarter of the wall. For example, the first three feet in from the front door gave the space more separation and definition. 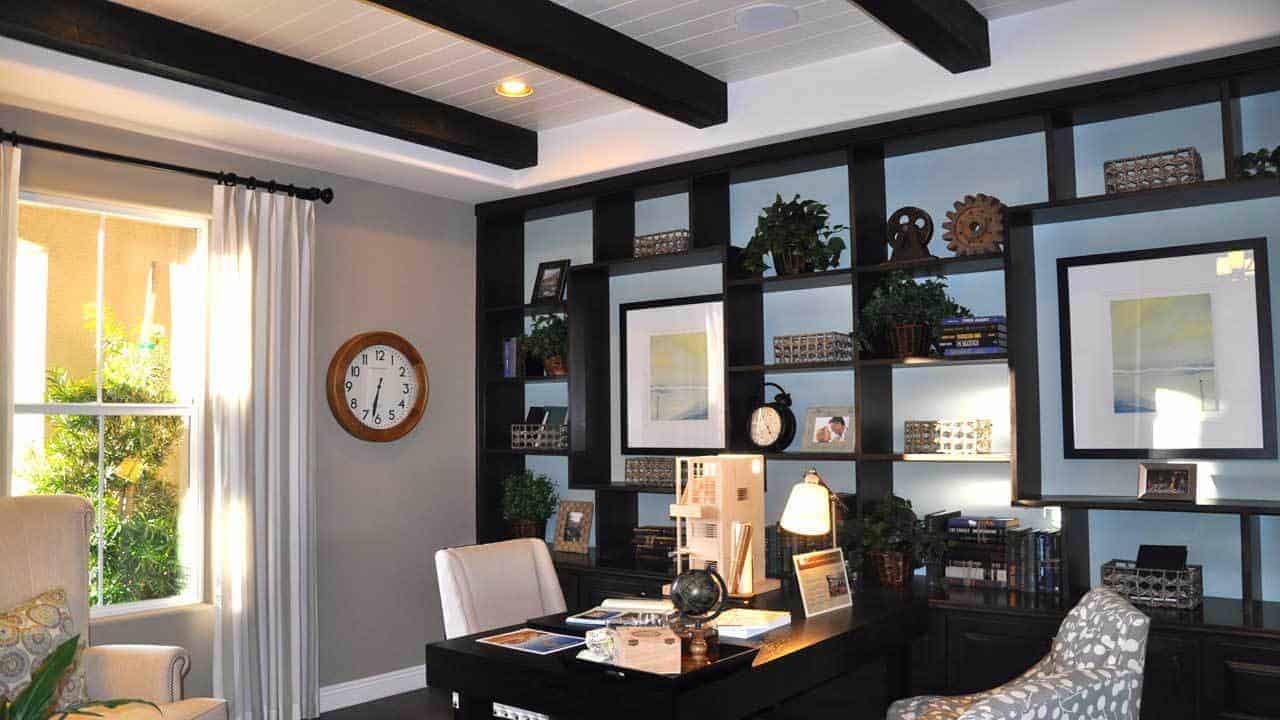 This dining room with three walls, is open to the hallway (defined by tile flooring) that extends from the front entryway, to the kitchen and adjacent family room. The tray ceiling with LED rope lighting defines the dining room space, in the absence of the fourth wall. 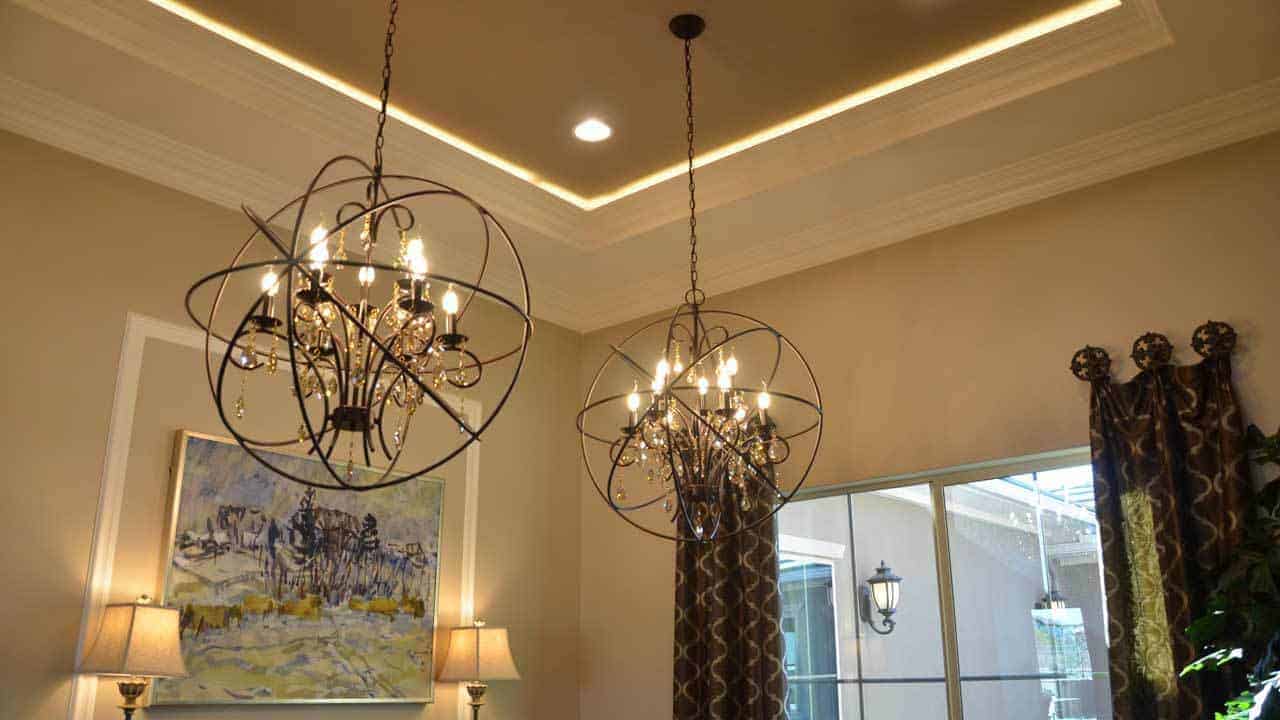 Ideas for Decorating Ceilings with Color and More

Maybe great light fixtures don't create enough visual interest for ceilings? And recessed “can” lights are here to stay because they don't take up any visual space, while providing the light we need to enjoy our homes. That's where a tray ceiling that drops down to define one or more living spaces (the family room pictured below) makes sense. 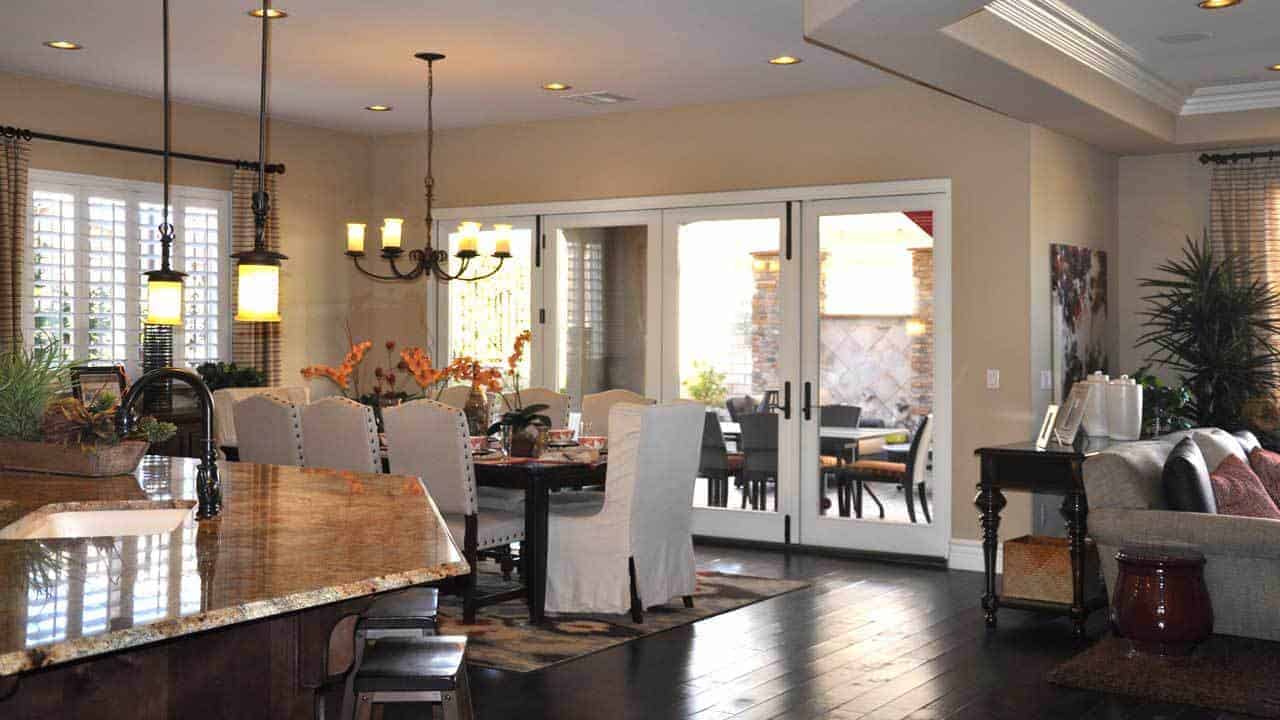 Bedrooms are getting larger, and combined with master bathrooms, they are the new spa in your home! In this master bedroom, the ceilings have southwest beams that match the color of the furniture. 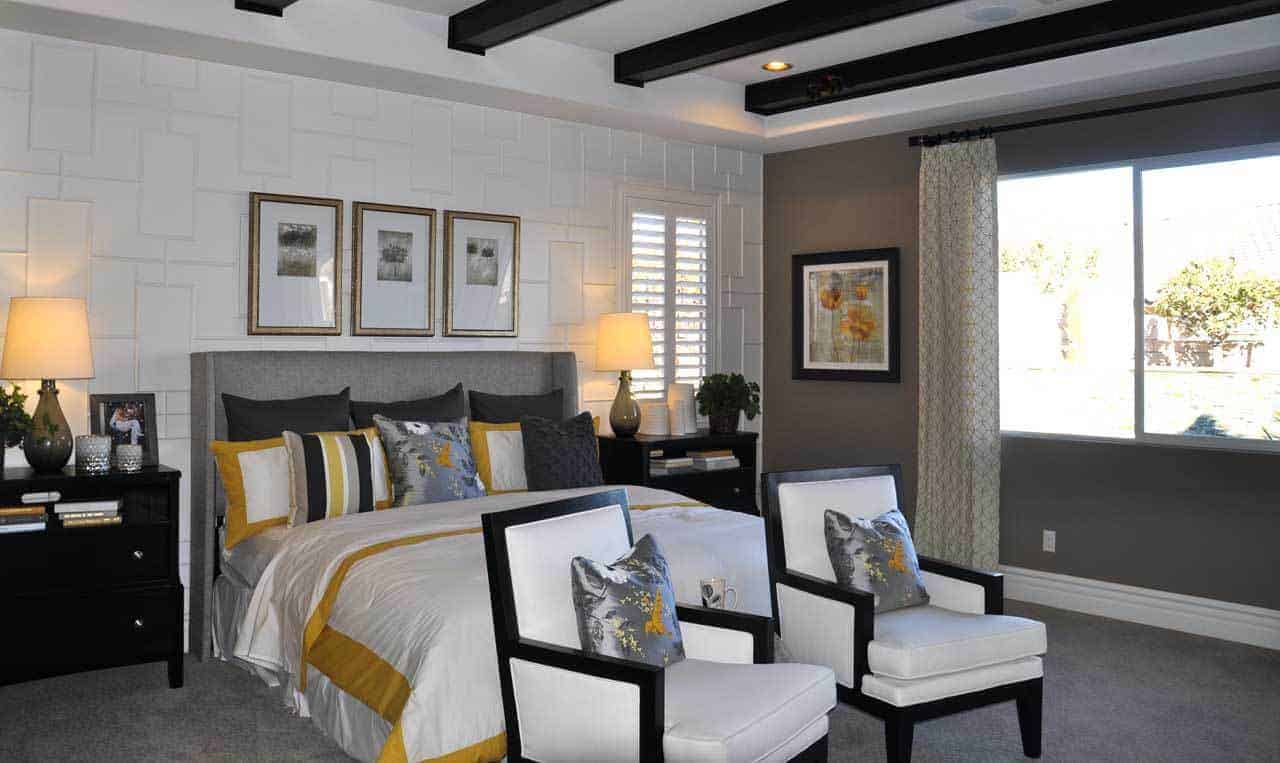 But wait, your ceilings aren't tall enough to add trim that's four to six inches. The bedroom ceiling below shows how you can dress up your ceiling with picture frame moulding that's fun and breaks up boring, ceiling colors that are white. 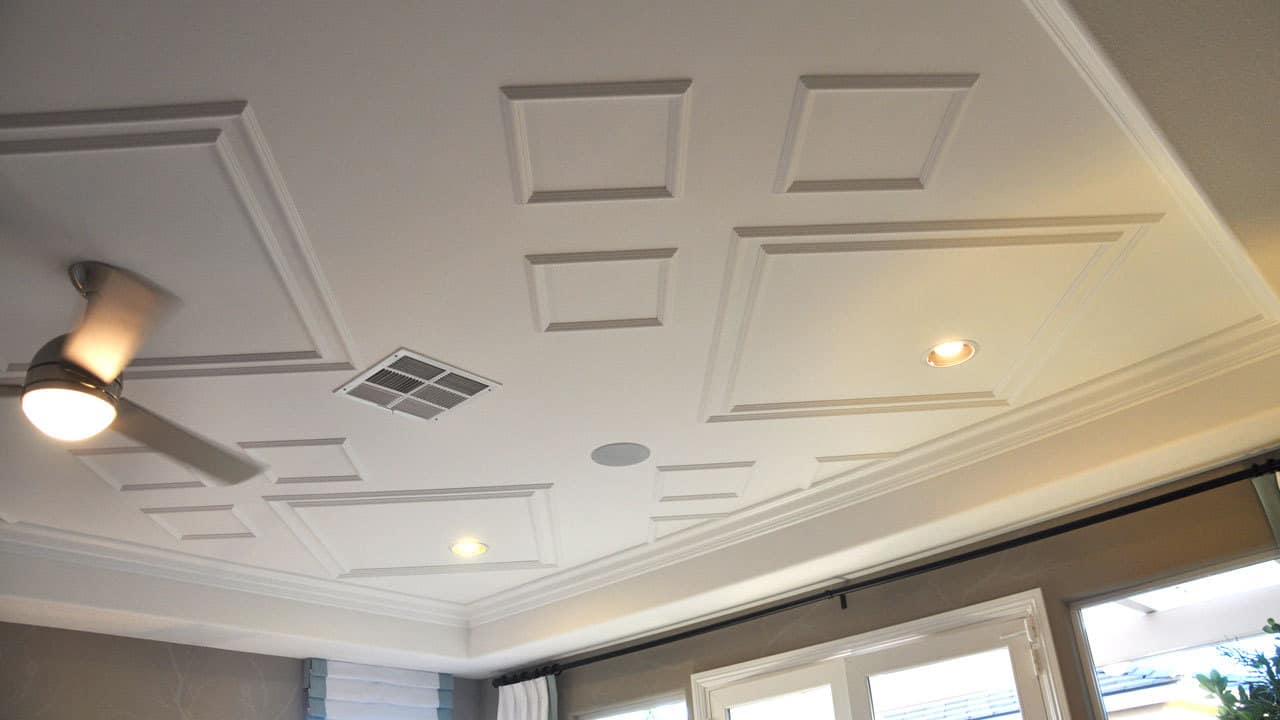 Not to be forgotten, the hallways we're putting into new houses are expected to be more than a pathway from one part of the house to another. They're meant to display art and provide some calm in our lives, so it's no surprise that they're getting their own ceiling treatment. 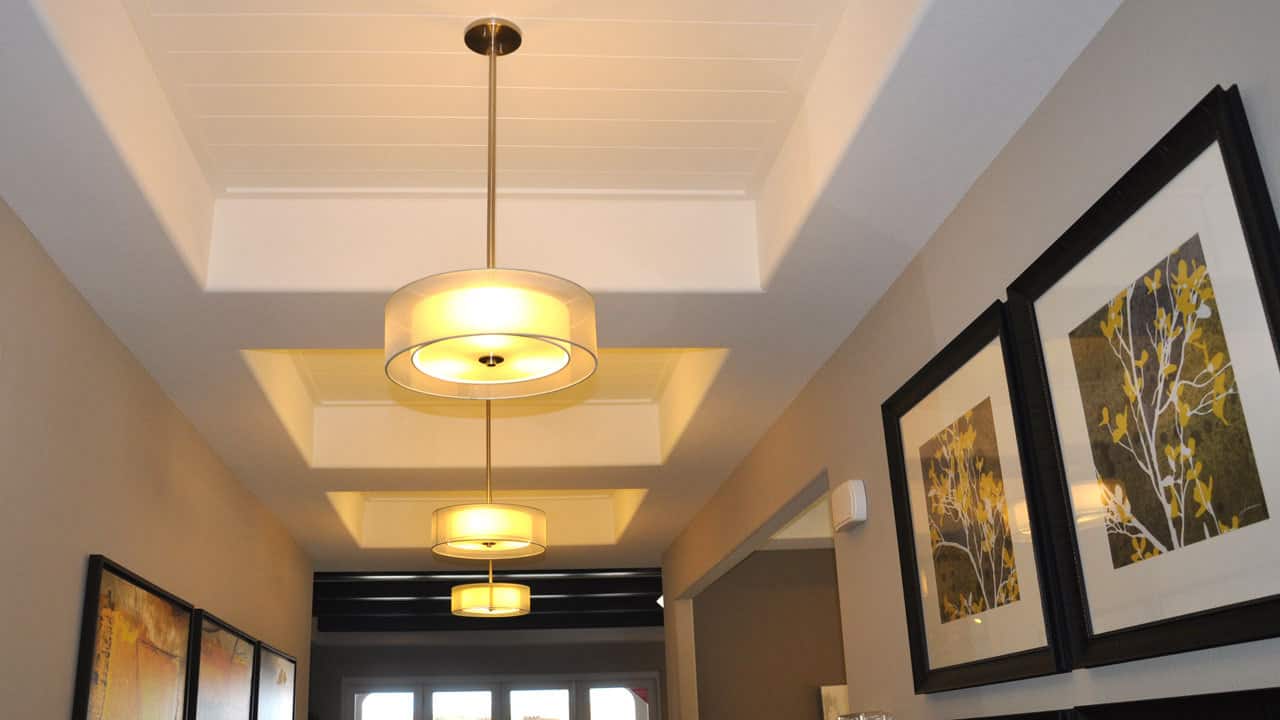 Photos taken by Tina Gleisner, at model homes by Toll Brothers in Las Vegas and Fulton Homes in Phoenix.