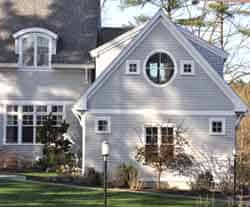 House windows play an amazing role in our homes and yet we often overlook them, or we fuss about decorating them rather than focusing on what makes them great. When you're looking at one house, you might not realize how many different window styles there are and what fun it is to mix several window styles like the homes (learn how to mix and match window styles) shown here.

Creative window combinations let you add windows in unique places where there may not be enough room for matching windows, where you want extra interior wall space for furniture or you want to make a personal statement. Done right, these special windows will enhance your home's curb appeal and make your home more cozy indoors with lots of natural sunlight.

Everyone has their favorite home features and you guessed it, windows are at the top of my list because I love natural sunlight and great views. Spending lots of time indoors working on my computer makes windows important for me. Windows help me enjoy the outdoors even when I'm inside, and help me feel connected to the world around me. 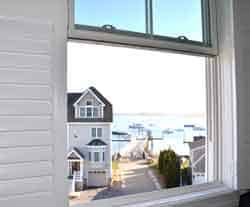 When we bought our condo, I thought my husband would love the view from the 4th floor but he decided to cover his windows entirely with shutters. He'd rather not worry about glare on his computer screen from the sunlight, and that's how I learned he doesn't need natural sunlight and great views the way I do.

We did agree that living in New York City wasn't a good idea because it's too dark, with the tall buildings blocking so much sunlight. We're staying in our condo and now that we've swapped home offices, it's time to decide if I should cut the shutters in half to get more sunlight.

Have you ever driven past a house and noticed an unusual window? It's actually nice to find houses with something unique that gives them a personality, something that says look at me. The house above was taken in Portsmouth, NH while the window collage below shows different sides of a house in Rye, New Hampshire. Rather than talk about creative windows, I wanted to show you what others have done to give their homes something unique or I wouldn't have stopped to take photos (okay, I do take a lot of photos and I like to think they're special).

So here's one house with multiple window styles on each side of the house. Some of the differences are the result of the house being built in multiple stages, so the original windows couldn't be duplicated at an affordable price. Some windows are original while others were installed when a new addition was added or repairs became cost prohibitive, and replacement windows were installed.

How Many Different Windows in One House?

Would you like to add a window, or make your current windows larger?