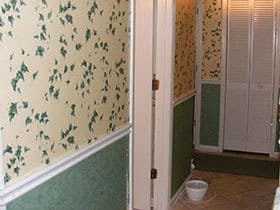 Removing wallpaper is never “fun”, but it is supposed to be a fairly straightforward process right? Read on to hear Karon's frustration when removing wallpaper from an improperly prepared wall.

Karon Thackston lives with her husband Troy in log cabin home in Elgin, South Carolina. The 1900 square foot home has three bedrooms and two-and-a-half bathrooms. It’s two stories and sits on four acres, two of which are heavily wooded.

Karon and Troy are the second owners and they’ve lived in the house for 20 years. Unlike many log homes, only the perimeter walls in Karon’s home are logs, the interior walls are drywall. Still, it makes for a very dark interior. Karon works hard to maximize the amount of natural light coming into the house. 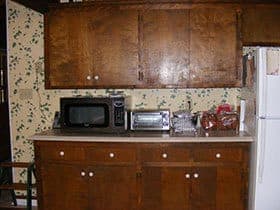 The previous owner painted all the non-wood surfaces beige, probably in an effort to offset the darkness. The beige didn’t suit Karon’s style, so when they first moved in, she wallpapered one wall in the kitchen and the back hall.

Over time, Karon grew tired of the ivy print with a yellow background. She decided it was time for a quick update; she would remove the wallpaper and paint the walls. Karon set aside a weekend for the project, never anticipating she’d have any problems removing the wallpaper. 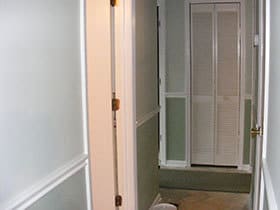 Karon gathered her supplies — a scorer and gel wallpaper remover, and set about removing the wallpaper. She followed the directions, and the wallpaper didn’t budge. She scored the paper and reapplied the gel stripper. She was able to remove some small pieces of wallpaper, but chunks of the drywall were coming off too.

Frustrated, Karon researched hiring a company to come in and professionally remove the wallpaper, but the cost was thousands of dollars for 350 square feet of space! So she took to social media asking friends far and near for suggestions on how to best remove wallpaper. A local friend offered to loan Karon a wallpaper steamer. 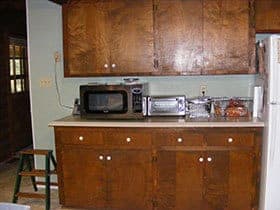 Karon ended up using every tool she had to remove the wallpaper. First she scored a section of the wallpaper, then she applied the gel stripper and let that section sit. Next she’d go and steam a section. She’d go back to the scored section, add more of the gel wallpaper remover, then go back and steam again.

Karon has had her fill of removing wallpaper, but she has some advice for those who are considering hanging wallpaper. She recommends making sure you properly prep the surface you are going to cover first. You may love the wallpaper now, but times change and so do tastes.

Do yourself a favor and make sure you prepare the surface correctly, just in case you decide to remove the wallpaper one day. You’ll thank yourself and Karon in the future.

Do you have tips for removing wallpaper? We'd love to hear them! 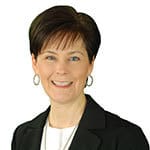