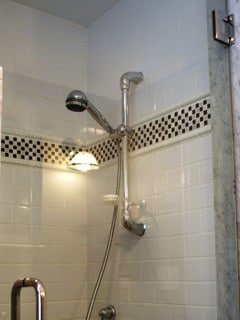 Remodeling a bathroom (or two) is a big project.  It gets bigger when there are time pressures and unexpected problems. Susan Nye set out to remodel the two bathrooms in her house to better meet her needs and those of her aging father. Read on to learn how she made the best of the unexpected and ended up with two bathrooms she absolutely loves.

Susan lives in picturesque New London, New Hampshire. Her home is a 3 bedroom, 2 bath cape with an attached 2 car garage. The house was built in 1973 and has just over 2000 sq ft. After years living as an American ex-patriot in Europe, Susan returned to New London permanently in 2003 to be closer to family, especially her aging parents. After a major illness, Susan and her dad decided the next best step was for him to move in with her. At 87, he’s still sharp as a tack, but requires assistance with some daily living tasks.

Remodeling a Bathroom For a King 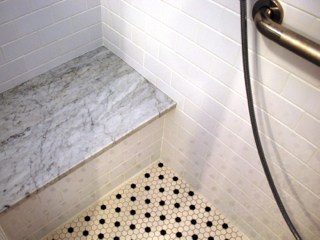 In order to ease her father’s transition and allow her him to maintain as much of his independence as possible, Susan knew she would have to remodel her bathrooms. To make the downstairs bath more accessible, the tub was removed and a shower was installed with a seat and a handheld spray head.

Susan moved upstairs and remodeled the existing half bath into a full bath designed to better meet her own needs. She’s an active hiker and skier, so her new bathroom includes a soaking tub. Susan took advantage of the remodeling project to update and improve the finishes. She wanted a timeless style so she told the contractor “… I want a style that is already out of style, so that it will always be in style.” She’s really pleased with the outcome and so is her Dad. He was thrilled to see that the honeycomb tile on the floor matched the flooring in his childhood home, built by his father in 1929.

From Remodeling A Bathroom To Cedar Siding

Of course what would a bathroom remodeling project be without hiccups? When the downstairs bathroom was demolished – the builder discovered that the sills were rotting. The contractor hired help to remove the rotted sills and replace them with pressure treated lumber. He also installed a ventilation system in the crawl space and laid foam insulation on the floor to keep the new sills dry.

To get to the sills, the carpenters had to remove the bottom 3-4 feet of vinyl siding that covered the house. Of course this type and color of vinyl siding is no longer available. Susan made the best of this challenge and removed all the siding and replaced it with cedar siding and trim.

Getting all of the siding removed and replaced took a long time and extended the life of the project significantly, but fortunately Susan and her dad could live in the house during this unexpected phase of the project.

Advice For Anyone Remodeling a Bathroom 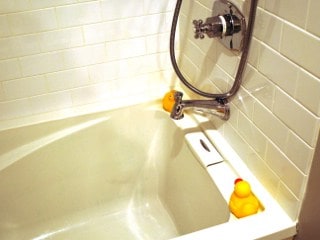 Susan advises everyone to be patient, and to expect the unexpected. It’s important to remember that no matter how rushed you are, don’t start your bathroom remodeling project before you have a clear understanding of delivery times, all components and an estimate in writing.

She also recommends getting all necessary materials (flooring, cabinets etc.) on the job site before the work begins, to avoid delays due to missing materials.

Have you ever remodeled a bathroom?
We'd love to hear what you learned.

A corporate dropout, Susan Nye gave up pre-dawn conference calls and spreadsheets for the fun, flexibility and fear of freelance writing. She is a regular contributor to a dozen regional magazines and newspapers. Her award winning blog, Around the Table (www.susannye.wordpress.com), includes her memoirs, recipes and cooking tips. Susan loves her new bathrooms. As much as she likes and trusts her contractor, she is very happy not to see him every day.

Get More Tips on Bathrooms