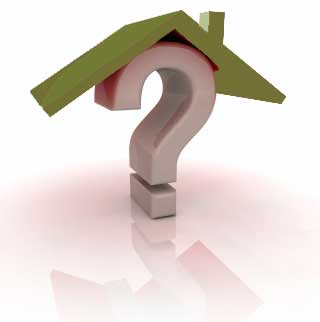 Housing and the economy are changing in ways noone understands. When I found William Olson's blog (link below with quote), I had to share it so those who want to learn more about the economy and why today's housing market is stalled. William is an “urbanologist” and author with his work published by the Chicago Tribune, International Journal of Economic Development … in other words, a respected economist.

Like many other people, I've been affected by the slowdown in housing. My business is helping homeowners maintain and repair their homes, and a sizeable portion of our work had to do with homeowners buying and selling their homes. Personally, we bought a condo in January, 2006 before we realized the real estate boom was over in NH. With all the homes we've bought and sold, we had never removed the “contingent on sale of existing home” clause from an offer. We'll never make this mistake again as we ended up carrying 2 mortgages for 15 months and that wasn't fun.

Are We in a Housing Depression?

When researching how long it might take to sell our home, I first learned “a lot longer” than homes priced at the low to mid-range of the market, i.e. those being bought by new home owners who don't have to sell an existing home.

Further research showed that high end home sales in the prior 2 years were double that of earlier years. My interpretation was families who would normally be moving up, had rushed in and done so ahead of schedule so the local buyers were few and far between. Based on this research, I believe if we could plot home values over 10 years, we'd have seen the housing bubble coming, and more important that home prices needed to settle down to the more traditional 5 to 6% annual appreciation curve. I've never felt things were as bad as the media suggests and William's post supports this.

From William's post, Anatomy of a Housing Depression, I found his explanation far better than anything I could write … “The extraordinary expansion of credit that fueled the boom in housing has finally begun to ebb and is leaving a satiated market and inflated home values in its path. The period of easy money during the expansion had the twofold effect of, first, cajoling an enormous number of households into the market over the past several years, many of whom, incidentally, would now be entering a “buyer’s” market, and, second, revving up the value of homes. In other words, a smorgasbord of loan products and investment speculation crammed ten years worth of housing demand into about five years of purchasing and flooded the market with so much capital that home prices were bid up ten years worth of appreciation in five years of time.”

Amazingly, I wrote this article before things got really bad with the collapse of multiple financial institutions. We're now living in an environment where most homeowners have decided the easiest thing to do is stay where they are. The challenges are incredible – unable to move for a new job, unable to pay the mortgage when a job is lost, and the list goes on. There are states like Florida, Arizona and others where there are so many homes under water that noone knows how long it will take for the local economy to recover.

We probably all know people affected by these events. For me personally, my son and daughter-in-law are in Florida. They would like to move back north but their home is under water so they're stuck where they are for the forseeable future. It's not fun for anyone and it will certainly shape the younger generations as they watch job security disappear, and now housing, a major stepping stone into adulthood is weakened significantly making tomorrow's lifestyles uncertain.

Numbers tell the story far better than any words, and recently I've been seeing maps that show the relative position of different states. Here is a map recently published by the Federal Reserve Bank of San Francisco, reflecting houses underwater in 4Q09. 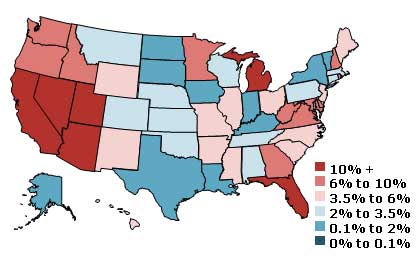