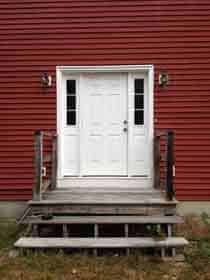 Re-caulking a door turned out to be the simple solution to fix the problem of unwanted water in my front hall. At first I was worried this would require another major repair, but I consulted my experts and everyone agreed re-caulking the door would do the trick.

Our house is only 11 years old, and we’re already on our second front door. The theory is that the first one failed due to an installation issue. The builder came back, addressed the problem and all was well.

Fast forward a few years and I noticed moisture by the base of the door again. Even though it’s our front door, it’s not our primary means of entering and exiting the house. So I had no idea how long it had been wet this time. I've been told this is a common problem for homeowners who wait until they see a problem, before they make the needed repairs.

My husband and his family are handy but I'm not. My husband recently launched a new business, so he’s been buried with work and has been traveling more than usual. I didn’t want to let this problem continue, so I enlisted the help of my mother-in-law and a cousin.  Both worked in home construction for years, and after close examination, they both came to the same conclusion as I had – the door needed to be re-caulked. It was impossible to trace the origin of the water, but everyone felt that re-caulking the door would eliminate the problem.  They told me all I needed was some waterproof silicone caulk. My mother-in-law even offered to loan me her caulk gun.

Learning About Re-Caulking a Door 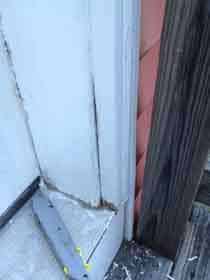 As the only child of a single mother, my home repair skills are limited to dialing the phone to ask for help or call a professional. I may not have much in the way of experience in home repair, but I am very willing to learn.  I asked my husband to teach me to caulk, but he admitted his caulking skills weren’t the best. He understood the process, but wasn’t so good at the execution. Still, I wanted him around for moral support.

We finally had a weekend where both my husband and I were home and not too heavily scheduled. We devoted most of the weekend to family time, but did dedicate some time to re-caulking the front door. Truth be told, it was pretty easy so all my worrying was for naught.

Here are the steps I took to re-caulk the door:

Note: If you can't borrow a caulking gun, they aren't very expensive. The trick is finding one that you can hold and operate easily so you'll want to visit a local building supply store to test them out. 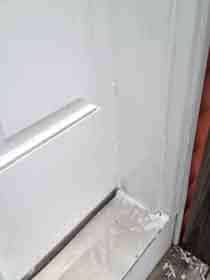 This last step was by far easier said than done. I’ve watched many This Old House episodes. How many times have I heard Tom Silva say, “and now I just run a bead of caulk.”

I’ve decided that caulking is an art form unto itself. You have to keep a light steady pressure on the trigger of the caulk gun, otherwise you get blobs and threads of caulk instead of a steady flow. I still need LOTS of practice, but I got the job done.

We’ve had a few soaking rains and I am pleased that I was able to solve my problem by re-caulking a door, and now I wonder what else needs some new caulking?

What small repairs have you tackled in your home?