With a new house you're likely to buy some new furniture. Living in a new place means finding new, reliable furniture companies. Here's what I learned working with three different furniture companies in central Florida. Product quality and customer service differ significantly and there's one company you definitely want to avoid. 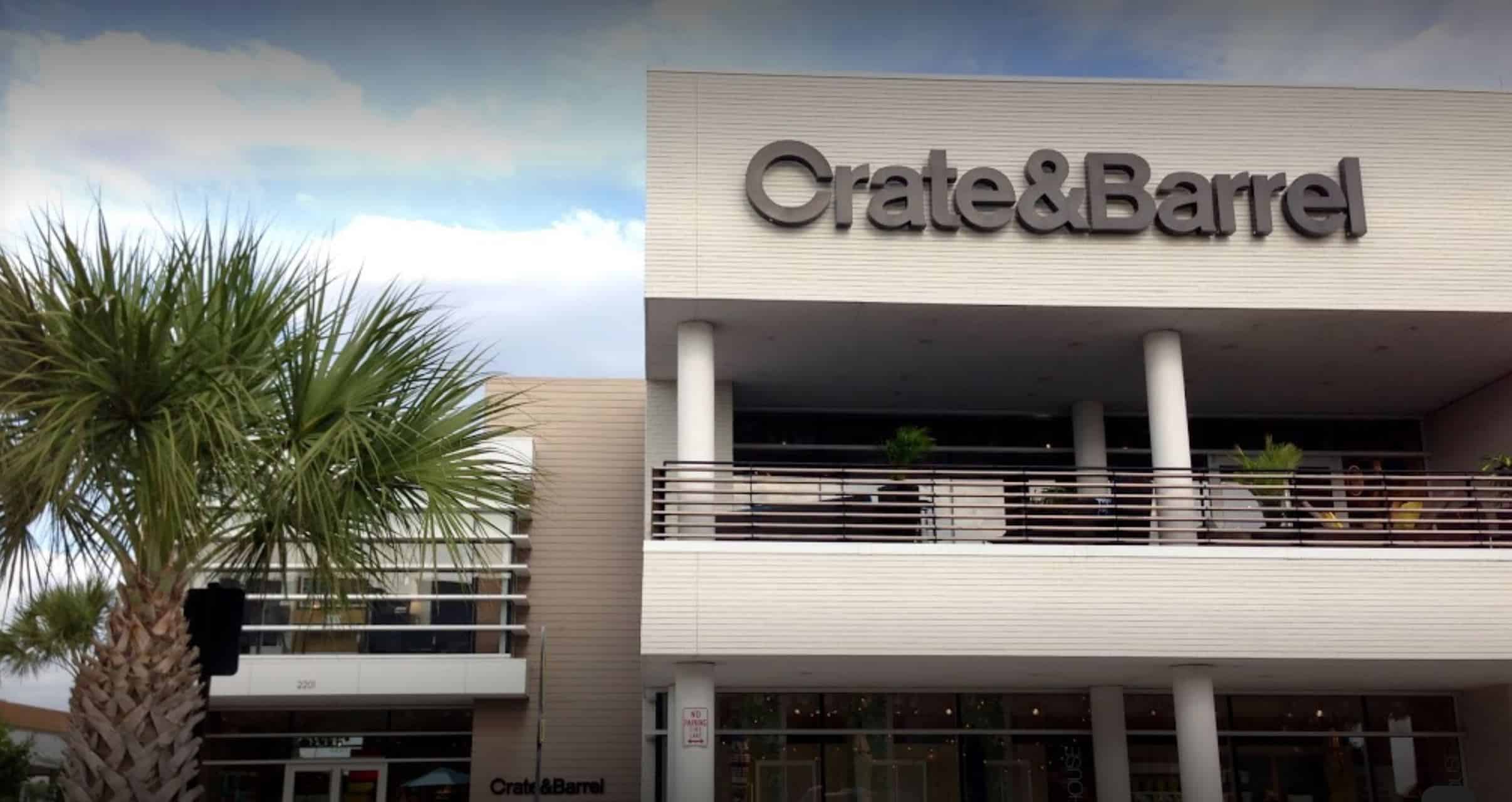 While I'm very comfortable with almost all aspects of building a home, decorating is a challenge. That's why a few favorite stores are important but none of them are located in Orlando. At first it appeared that my choices were to have my decorator friend collect furniture for me in New Hampshire or buy furniture in Phoenix and move it to Florida, really?

My first breakthrough came visiting a friend who had recently bought a condo in Naples, Florida. Here's my journey working with several furniture companies. My focus is on quality furniture as I tend to move fairly frequently and customer service dealing with problems. Grades in parenthesis …

Here's what happened plus lots of tips on how to deal with furniture companies. You need to read this to learn how to fight an unscrupulous company like City Furniture.

My granddaughter fell in love with this bunk bed style (steps) when she 4 years old and we were checking out houses in Celebration, Florida. Now that I'm moving here, it was time to check out bunk beds in all the furniture stores. Pottery Barn had the best bed so I ordered one in December, not minding that delivery would be delayed until the end of February … because my house closing had slipped to March.

Pottery Barn never called when the bed became available. When I called to schedule delivery in early May, they didn't have all the parts, really! They said they could deliver the bed at the end of May. I laughed because I left Florida for two months before the date they gave me.  and I laughed.

Since they had charged my credit card now, they became an utter nuisance with emails or phone calls daily. Finally to stop this, stepping out of a class at Boston University, I explained I would not return to Florida until the end of July. More wrangling and finally decided Pottery Barn wasn't serious about their furniture business, so I cancelled the order!

PS If you want to learn more about bunk beds, here's all my research … Beds for Small Bedrooms.

When my granddaughter saw the pink bunk bed, she immediately said she didn't want a pink bed! She wanted blue and so her bedroom is painted blue and the sheets/comforter are blue.

After I cancelled the Pottery Barn bed, I headed over to Rooms To Go as they were my second choice. I walked around the showroom checking furniture quality to make sure I was comfortable with the store. Then I ordered Chloe's bed, a twin over full size bed plus a trundle as I expect I'll have lots of company living just 20 minutes south of the Magic Kingdom.

A few bumps in the road but so far, nothing I haven't been able to resolve:

My only issue with Rooms To Go is the sneaky way they throw a 3 year warranty onto your invoice with no discussion. When I called to complain, they immediately agreed to remove the charges.

Rooms To Go – B+ for good customer service and would have been an A if furniture quality better. 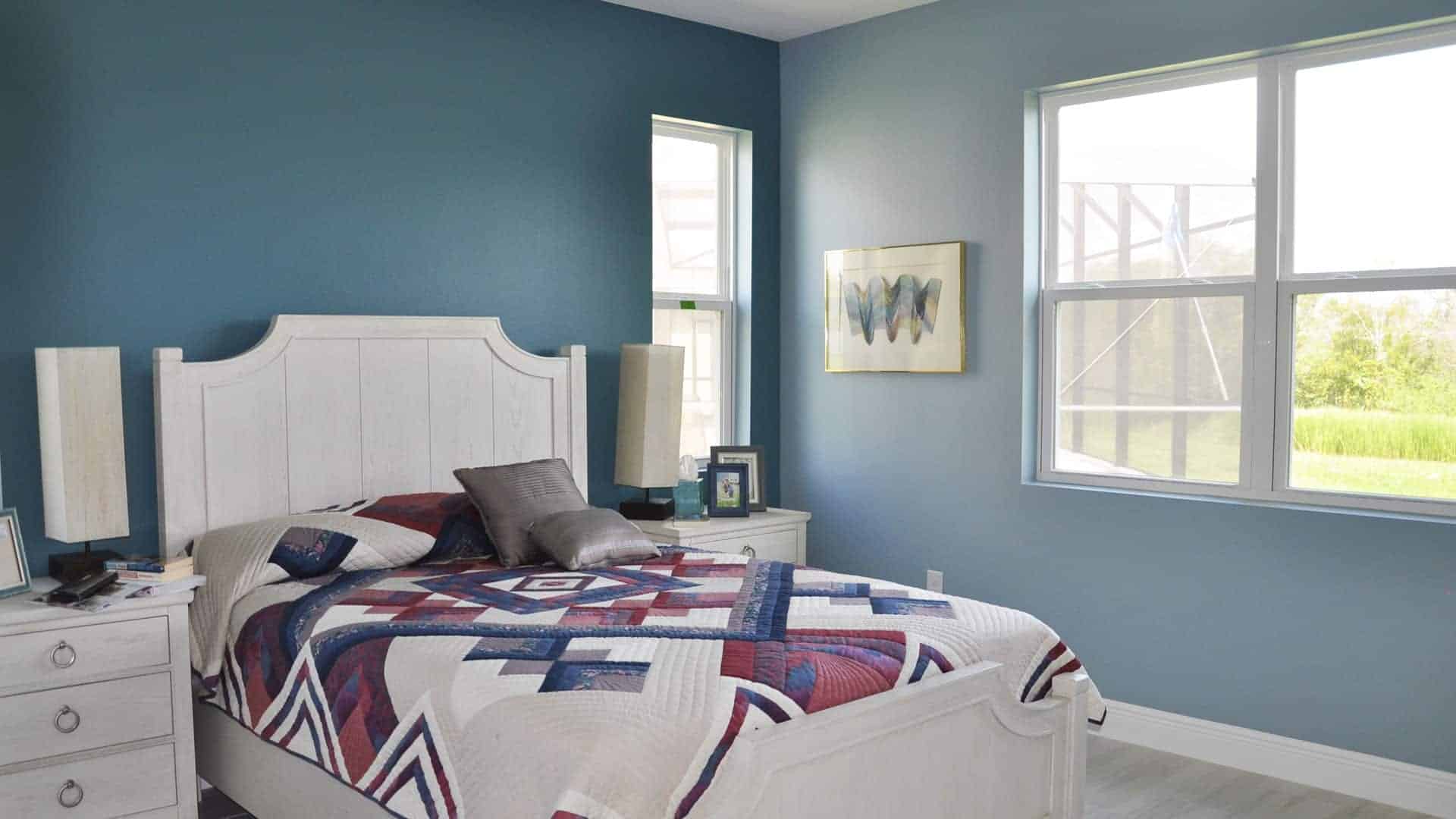 Matter Brothers doesn't have a store in Orlando. I discovered them by accident when visiting a friend who had just bought a condo in Naples, Florida. We were out shopping for furniture for Jean's condo when I saw their store front so we stopped.

I liked lots of the furniture styles in Matter Brothers' showroom. Of course there's also the matter of furniture quality as I expect my furniture to last for 20, 30 or more years and survive a few moves. The first thing you want to check is how drawers are constructed. If they're not dovetail construction, time to move on. Of course there's more ways to review furniture but I'll leave that to another article.

Here's how my relationship went with Matter Brothers: 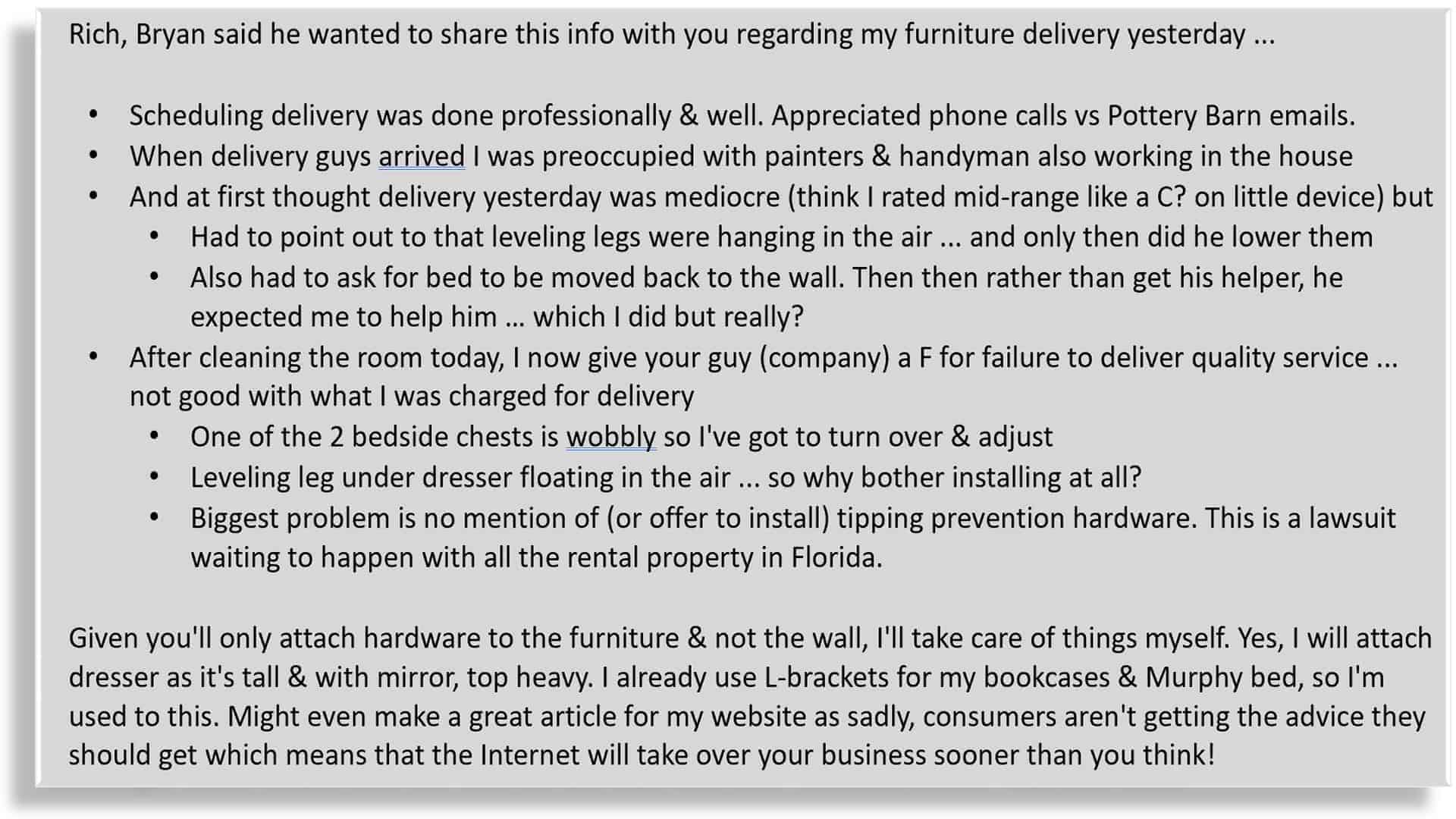 Matter Brothers – B- for quality furniture but less than stellar customer service!

Had my first overnight visitors, my friends with the condo in Naples. There was time to buy a new Keurig coffee maker but not enough time to get a dresser for the room where they stayed. This pushed me to stop by City Furniture again as all I needed was one more dresser and a few rugs.

When my New Hampshire decorator said she'd sold the dresser (shown above) several times, that's all I needed to hear and ordered it along with a lamp for the nightstand. The sales woman was excellent and we had a long discussion about their three year warranty program (why I discovered the problem with Rooms To Go) but I refused it. My position is I'm buying quality and if that proves to be wrong, I will get rid of a piece of clothing or furniture rather than deal with it … a waste of time.

So here's how my City Furniture story goes as it's still a work in progress:

Online reviews confirmed poor product quality plus inadequate repairs. Also learned this company strings customers out for months, refusing to replace furniture or give refunds. With no follow-up for a week, I called my credit card company to dispute charge knowing the window of time to do this is limited, typically 60 days.

Warning to consumers. Read the City Furniture reviews and share this article with others. We need to help people protect their money when a company doesn't deliver what was promised. Why shouldn't I expect an $800 dresser to function properly?

Since discovering Crate & Barrel in California in the 1990s, they've been one of my favorite furniture stores. Love their style and the quality of their products is solid. So when growing frustrated with the limited furniture companies in America's dream vacation land (Orlando, Florida), I decided it was time to drive over to Tampa.

Not surprising that in less than two hours I found several rugs, coffee table and credenza choices that I liked. But I'm something of a chicken when it comes to making big decorating decisions. That's why I love my long-time friend and interior decorator Jennifer Myers. She's been helping me since 2005 all the way through choices big and small, for my new home in Florida.

While I'll write later about how I made my final selections, here's how everything worked with a store that knows how to deliver great customer service:

Crate & Barrel – A for consistent product quality through the years and outstanding customer service.