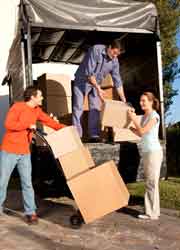 Moving trends have changed over the last few years because of the difficulty homeowners have had (or expect to have) selling their homes. Did you decide to stay in your home until the housing market improves and wonder  what others are doing?

With so many real estate stories in the news, digging out some facts and figures seemed appropriate. The caution though is … real estate is very local, so US census data gives you the big picture but you need to research your local market (town and neighborhood) as there can be significant variations in prices and inventory (houses for sale) turnover.

Many of our homeowner dreams come from where we grew up — our parents home, the community where we went to school, etc. That's confirmed by the map below showing Americans who still live in the state where they were born and you might find some surprises. Yikes, New Hampshire (where I've lived for more than 10 years) is one of six states in the US with the lowest percentage of residents born in New Hampshire.

Moving Facts: Who's Moving the Most

Since the 1970 census, American mobility has ranged from a high of 46.4% (from 1975 to 1980) to a low of 35.4% in the most recent census covering 2005 to 2010. Income appears to have less influence on how often we move although marital status does show very different numbers with those separated having the highest rates (51.6%).

Moving Facts: How Far & Where Do We Move

Between 2005 and 2010, only the south had significant population growth with 1.1 million due to moving. Most of the movement came from the northeast and midwest while the west part of the US is fairly stable. 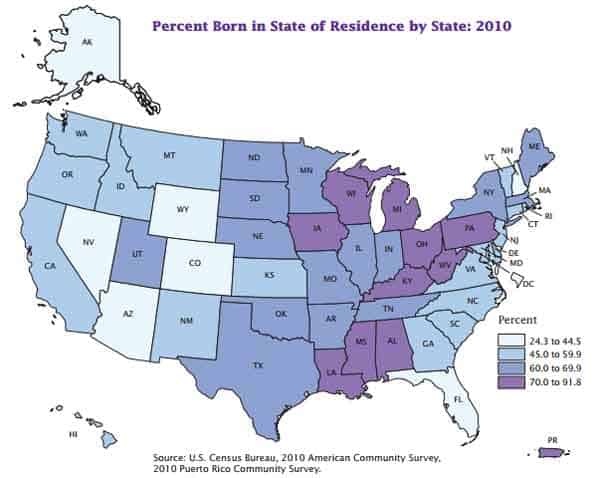 Wondering who collects all this information about how often we move and more? The US United States census has included questions since 1940, beginning with the simple questions “where did you live 5 years ago?”

Do you still live in the state where you were born?
Have you moved away, and returned to your home state?

Get More Tips on Moving