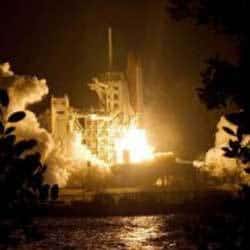 Your home seems complicated until you compare it to home repairs on the space station, and then anything is easy. One of the goals of this shuttle was to add additional living space in space, something akin to putting an addition on a house on earth. There's a big difference though — you can't run out to the hardware store if you forgot something.

Some homeowners need to update their home to accommodate a new family member, a baby or elderly parent. Rarely do they need to consider what changes their home would need if the size of their family were to double although it does happen with blended families and multiple births.

Putting a Home Addition on in Space

The current space (2008) shuttle mission is focusing on expanding their living space to support a crew of 6 versus the current crew of three (3). The first thing they have to do is make sure there is enough power to support additional crew members and in space, they need to generate the power they need. Four (4) busy days of spacewalking are planned to repair the station's solar rotary joint(s) to ensure the station can generate enough power for those extra crew members.

The Endeavour is bringing 32,000 pounds of equipment to build the new living accommodations. Usually when we buy something big, we only worry about getting it in the car. One shower we ordered was sent to the wrong plumbing store location. I drove an hour and a half to get  the shower as I'd promised our customer, an elderly couple, they'd only be without a bath/shower for one night. I wasn't too happy when the shower didn't fit in my van and I had to rent a truck. Everything worked out fine when my husband joined me on the second trip to swap the rented truck for my van, and the business paid for our overnight dinner and motel!

A home addition isn't a typical space station project. “It’s the most jam-packed logistics module we have ever carried up there,” STS-126 Commander Chris Ferguson said. “We’re taking a three-bedroom, one-bathroom house and turning it into a five-bedroom, two-bathroom house with a gym.”

Wondering what types of equipment goes into a space station? Here's a partial list with some items familiar to all home owners and some we've probably only read about: