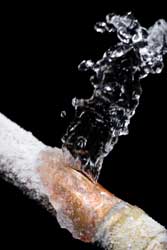 Water freezes when the temperature falls below freezing, like making ice cubes in your freezer. When water freezes it expands,and in a pipe it may expand enough to burst the pipe depending on how much pressure builds up in the pipe. If a plumbing pipe bursts, the water escapes and goes in many directions and may cause serious damage … and the worst case is when the pipe bursts inside the walls, where you can hear it but can't see it. That's when you need to shut your water off as quickly as possible (read Learning to Shut Your Water Off).

Houses in northern climates are built to withstand freezing temperatures. Pipes have insulation between the exterior wall and the water pipes, protecting them from freezing weather. The biggest risk is where there are holes or cracks that allow cold air to enter the home and cause the temperature surrounding the pipe to drop. Water pipes in warmer climates are more likely to lack adequate insulation to protect them from freezing temperatures as they occur infrequently and homeowners aren't as aware of the problems.

What Causes a Pipe to Burst

Let's explore more familiar instances of freezing water. Ice cube trays allow the water to expand up as the water freezes. If you leave a full bottle of water/soda in the car during the winter or put it in the freezer to cool quickly and forget it, the bottle may burst. As the water in the bottle freezes and expands, the air compresses and the pressure builds until it bursts to relieve the pressure.

In the same way ice forms in the pipe, typically creating an ice blockage that initially doesn't cause the pipe to burst. It's not until continued freezing occurs and more water freezes between the ice blockage and the closed faucet, that the pressure builds until the pipe bursts. On the other side of the ice blockage, the water is able to back up towards the source of the water.

Uninsulated pipes in unconditioned spaces will begin to freeze when the outside temperature reaches 20 degrees Fahrenheit or lower. Most problems occur with temperatures in their teens although high winds can force cold air through cracks in the outside wall and freezing may occur above 20 degrees.

Which Pipes are Most Likely to Freeze

Ideally most water pipes are placed in heated spaces, running along interior walls. This is good home design but sometimes gets lost while satisfying more functional and aesthetic requirements. Here are some of your choices for dealing with pipes that are vulnerable to freezing.

When the Pipe Freezes

When you think a pipe has frozen, i.e. when you open a faucet and no water comes out, it's time to call a plumber. Turn off the water at the main shut-off valve (read Learning to Shut Your Water Off) until needed repairs are completed. You can try thawing the pipe with a hand-held hair dryer starting close to the faucet. If there is any standing water, do not use any type of electrical appliance. Don't try using any type of open flame as this could start a fire.

Get More Tips on Bathrooms