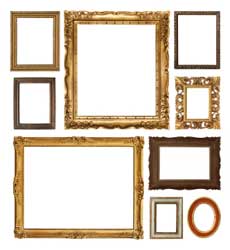 Frames are the perfect way to hang artwork and photographs on the walls of our home. Frames will reflect and enhance what you're putting inside the frame, along with the type of glass you use to protect things. You also need to consider the weight of the final, framed object when adding the wiring on the back and deciding how to hang the frame.

Most walls are made of sheet rock (also called drywall) and their thickness varies from one quarter inch to 5/8ths inch. For lighter pictures and the right hanging hardware, the drywall will be strong enough. As your framed artwork gets heavier, you'll want to find the wall studs so you know the screws are secured in wood. Here are tips for different ways to find wall stud …

Look at one of the walls in your home, a long wall. Most walls are 8 ft tall, the most common size for sheet rock being 8 ft by 4 ft (drywall does come up to 4 x 16 ft). These drywall sheets are nailed or screwed to wall studs which frame each room, as well as the exterior walls of the house. The vertical pieces of wood behind your wall are called wall studs. Wall studs are generally 16 inches apart, measured from the center of one stud to the center of the next stud, called “16 on center” and abbreviated OC.

Here are some tips for making it easier to find your wall studs.

Note: Occasionally wall studs will be 24 inches on center, instead of the normal 16 inches on center. Older homes, especially those with horsehair plaster walls will likely have non-standard distances between the wall studs. That is why these older homes often have wood trim just below the ceiling to support hanging pictures from wire.