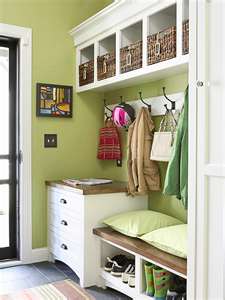 Family mudrooms got their name from rooms that were used to leave the mud at the door, and reduce cleaning chores. That was many years ago when many people lived and worked on farms, and you could track in a lot of mud at the end of the day. In reality the mudroom wasn't really a room initially. It was an entry into the house where people could take off their muddy boots.

Today mudrooms are typically found near the kitchen, often they're a room you walk through between the garage and the kitchen. With larger houses, the family mudroom has become pretty common. With young children, they're ideal for hanging up coats and storing backpacks, sports gear and more.

Family Mudrooms For More than Storage

… First published by Patti Phelps at All in the Details.

A mud room or mudroom is an area built into some houses to act as a barrier between the outdoors and indoors. Especially in New England where we have wet, muddy winters, this type of small, specialized room can be a useful addition as it helps to keep the house clean. In addition, mudrooms provide a clear boundary between indoors and out, which can be a useful reminder for animals and exuberant members of the household.

Generally, a mud room has easily cleaned floors made from materials like tile, concrete, or linoleum. In extreme cases, one may even have a drain in the floor to make sluicing the floor very easy. A well designed room also has ample hooks and racks for damp, wet clothing, as well as racks or cubbies for shoes. In addition, benches for people to sit on while they remove their shoes are not uncommon. All of these measures are designed to encourage people to remove sodden or dirty layers before entering the house. 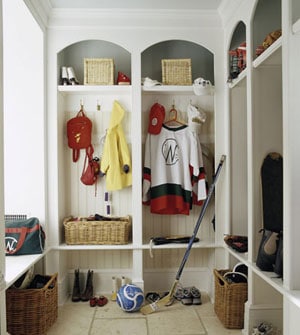 Previously, the mudroom was the area where everything was dropped as you entered the home.  Women have spoken…and in order for them to have a sense of calm upon entering their own homes, they are including an organized mudroom as an “essential” on their needs list whether it’s for a new home or a remodel. 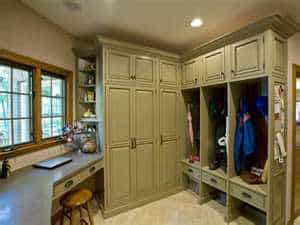 For children, this area can have cubbies or lockers to store coats, hats and mittens, boots, shoes and athletic equipment.

A family mudroom means less stress for everyone as they try to get out the door in the morning.  If desired, everything can all be hidden behind cabinetry that appears as another piece of beautiful furniture … and most importantly, the kitchen area remains the calm haven it was planned to be.