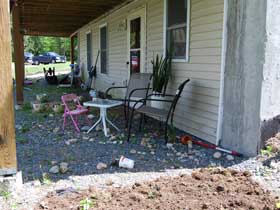 Last Mother’s Day Weekend, Susan Ann Wall began expanding the patio she built a few years ago. The more she finished, the more she liked it, so the project kept growing until she had extended the patio the length of the house and added on a section specifically for a fire pit.

Susan lives with her husband and three children on a hilly street where her house overlooks a small river valley town in the White Mountains of New Hampshire. Her home shares 3 acres of lawn and 3 acres of wooded area with her mother’s Victorian style apartment house. Her house is a Cape Cod style house built in 2007 with four bedrooms (two on each floor) and a bath and a half. The first floor also features an open kitchen/living area. The basement is home to a laundry room, a future bathroom and Susan’s office. She works as an instructional designer and writes contemporary romance novels.

In the summer of 2011, Susan built a small patio under the first floor deck which is just outside her office. She found a large teapot and matching tea cup planters and bordered the walkway with them. She dubbed the space “The Tea Party Patio”. She was so thrilled with the results she immediately devised a plan to start expanding the patio. Sadly, the demands of her life, workload and publication deadlines, and kids’ activities delayed the project by a few years. 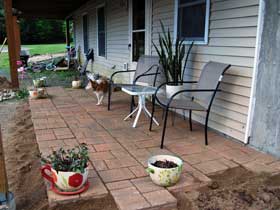 The project began on last Mother’s Day weekend and it took the entire summer to complete. As it continued, Susan was thrilled to happen upon more tea pot and teacup planters she scooped them up to support the tea party theme of the patio.

Water presented the biggest challenges. The edge of the patio is on a hill that experiences frequent washouts in heavy rain. There is an existing drainage trench. After a heavy rain showed this wouldn’t be enough to prevent further washout, Susan dug it out a little more and added large erosion stone. The stone makes a nice border and drains the water well.

Advice for Expanding a Patio 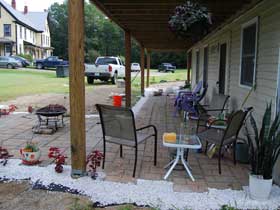 Have a budget in mind and plan and measure thoroughly. For Susan, planning and careful measurements helped keep the project on track and on budget. She browsed online extensively and her planning and measuring in advance allowed her to calculate exactly how many bricks she would need. Because of its size this was an expensive project; but armed with her plan and her budget, she was able to spread the cost out over the summer, buying more bricks and other supplies each week instead of all at once.

Spend wisely to work smarter. Even though she had access to free sand, Susan paid to have a truckload delivered to save labor. Having the pile of sand right there made it much more enticing to pick up a shovel and get started. The downside was that the neighborhood cats left a few presents. Susan recommends placing a tarp on the sand pile when you are not digging in it. 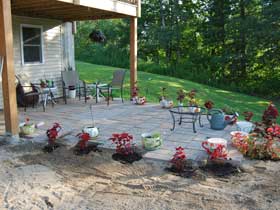 Get to know the professionals at your local building supply store. Susan built a relationship with the sales associates at her local Lowe’s store. She let them know what she was doing and took advantage of their knowledge and experience. She regularly bought ten or twenty 16×16 pavers and the staff helpful transporting them to the register and her car. They even gave her a heads up when the pavers she was using had been discontinued and wouldn’t be replenished. Fortunately, the store had one last pallet of pavers that would more or less finish Susan’s project.

Be thoughtful about your project rather than impulsive. Susan browsed online and in the store often for ideas, and would sit on those ideas for days before coming to a decision. It paid off in the end by saving both time and money.

Have you ever built or expanded a patio?

We'd love to hear your experiences!

Most mornings Susan Ann Wall wakes with fictional characters conversing in her head. She spends her days writing contemporary romantic fiction and working as an instructional design consultant.

When she’s not tapping away on her purple netbook, she enjoys chilling out with her three kids, drinking a nice cold one with her husband, and jaunting off to Bon Jovi and Kenny Chesney concerts. Learn more at www.susanannwall.com