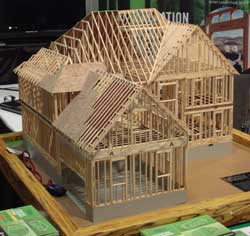 Homeowners have learned to ask for estimates for any project around the home. Most don't realize how complicated a home's construction is beginning with the rough framing shown here. There are many systems hidden inside the walls like plumbing to deliver clean water and remove waste water, the electrical system, the heating and cooling systems and more. These systems are mostly forgotten until something doesn't work correctly.

The challenge with estimates is you need to fix not only the visible problem. You need to trace the symptoms back to the source of the problem and fix it too. This often involves dealing with one/more of the systems hidden in the walls and you can't see these when preparing an estimate. For example, my handyman business deals with lots of water stains on ceilings and walls. It doesn't make sense to fix the symptom of the problem until you're certain it won't happen again.

Preparing estimates includes some science along with a bit of magic as we can't see the surprises we're sure to find behind the walls. With my handyman business, we're always learning and improving our estimates to earn our customer's trust from the beginning of a project to the very end. The goal of estimates is to help homeowners understand all their project costs up front. In the first few years running my handyman business, I learned from those jobs where the customer wasn't happy at the end of the job.

There are estimates you never forget. One punch list job included installing a new sliding patio door which the homeowner had tried to do themselves and run into problems. We had to make changes to the rough framing which wasn't part of the estimate. The job also included installing a cupola on the garage roof and building/installing working barn doors on the loft above the garage. I was thrilled when my 36 hour estimate came in at 38.5 hours given the hidden problems … but the customer wasn't happy. That's when I started adding contingency to my estimates. You can expect contractors to add 10 to 20% contingency to cover unseen costs in any repair or remodeling estimates. Homeowners should add their own contingency (10% recommended) for changes they decide to make during a project.

When finishing an attic, a customer said he'd handle the flooring, so this wasn't included in our estimate. Unfortunately the rough stairs weren't up to code. When my technician explained what was needed to bring the stairs up to code, the customer got angry because he knew this put him over his budget. After this I started adding allowances to my estimates to insure the customer is aware of all costs. For this job, there would have been allowances for labor and materials to prep stairs and install flooring. We still miss things, i.e. replacing a window on a bathroom wall we were tiling? 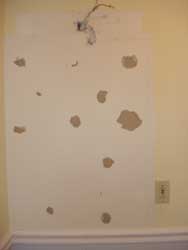 You might think these problems only happen on bigger jobs. Wrong! We find these problems on jobs as small as 1 hour, i.e. replacing a garbage disposal with wires are frayed and the hose has a leak. Another common problem is replacing bathroom wall mirrors with something smaller and stylish to dress up a bathroom. What should have been a small job replacing a bathroom mirror in one home, became much larger when we found the mirror was glued to the sheet rock, which was never primed. The glue caused the paper protecting the drywall to tear (photos at right) and we had to apply several coats of mud to get a smooth wall.