Life at Home for You & Your Family Cooking & Baking
Content may contain referral links. Read our disclosure policy for more information. 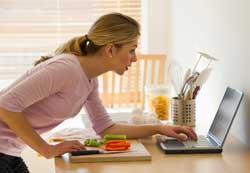 When you're buying a home, you expect the kitchen to include a microwave oven and in the US, they are fairly common but that wasn't always the case. The heating effect of microwaves was discovered accidentally in 1945 when an engineer, working on an active radar set, noticed a chocolate bar in his pocket started to melt (for details see Wikipedia). The first food intentionally cooked with a microwave was popcorn and the second, an egg which exploded.

I remember our first microwave (I won't tell when that was). We thought it was a great tool for defrosting whatever we decided to have for dinner … as we weren't good at planning ahead (then, or now). It took years to learn microwave cooking. So it's Friday night and you guessed it, the pork chops went into the microwave to defrost.

We used to pick out a favorite cookbook but now it seems easier to google anything including how long to defrost the pork chops, and then why not look for recipes …  “cooking pork chops”. The amazing thing was, the How to Cook a Beautiful Pork Chop instructions were quite refreshing. Hard to believe a recipe exists that DOES NOT include the word microwave.

“To cook chops in a skillet, heat a small amount of oil (if the pork is lean) in a large, heavy skillet over medium-high heat. Place the chop in the skillet; do not cover. Cook the chop uncovered, turn occasionally, until browned on both sides. Season as desired and serve immediately. This works well with 3/4-inch-thick chops. A 3/4-inch chop will take about 6 to 10 minutes total cooking time. Thinner cuts will take less time. The thicker the cut, the more moderate the heat, but thinner cuts can be done on higher heat for less time. A thicker cut will take longer (a 1-1/2-inch chop will take about 15 to 20 minutes).”

What was also interesting, is they offered “quick cooking” alternatives but none of them included using a microwave. If you want to cook a pork chop quickly, you can grill or broil a 3/4 inch chop in 6 to 8 minutes. Wow!

Now the rest of this story. I'm not the cook in our house. I don't stay focused on what I'm cooking for more than 2 to 3 minutes. My idea of cooking is to start something on the stove, in the over or … you guessed it, the microwave. Then I continue doing what I was doing, or take the dog for a walk, and believe the food can cook itself.

Get More Tips on Cooking & Baking