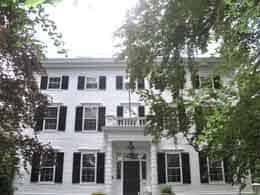 Traditionally, Colonial homes had lots of symmetry in the design of the home's exterior, as well as the indoor floor plan. The good news is that while this style of home has remained very popular, the exterior style doesn't dictate the interior floor plan. You can have a traditional colonial style home on the outside with a contemporary, open floor plan inside.

Colonial homes are rectangle and sometimes square, and mostly 2 stories. The Colonial house design focuses on the entryway, with the front door at the center of the house. The home design usually has two windows on either side of the door, and five windows on the second floor. The doorway usually has a small, covered portico supported with columns and a pediment over the door.

Other common exterior features of Colonial houses include:

Immediately behind the entry door in a traditional Colonial house are stairs and a hallway dividing both floors. As the demand for open floor plans has grown, many custom home designs have removed some of the interior walls to meet this need. In the house designs below, from www.floorplans.com, you can see the central hallway (blue) dividing the first floor. The bedrooms on the second floor vary based on the location of the stairs and upstairs hallway.

With very traditional Colonial homes, the interior will still have a formal dining room and living room, with easy access from the kitchen. These two floor plans have maintained the formal dining room and replaced the formal living room with a great room that opens to the kitchen, for a family friendly layout. They both have a smaller room on the first floor which can function as a study or den, when adults want more privacy.

With the rectangular shape of Colonial houses, they are fairly easy to expand. You can make rooms larger by adding linear feet to the house. You can add rooms with a side wing if you have a wide building lot, or extend the house in back like you see they've done with the eat-in-kitchen, morning rooms in these plans.

Get More Tips on Building a House