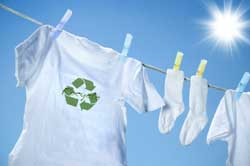 Clothes lines existed well before the invention of dryers so why don't we use them more? The truth is that outside the US, clothes lines are used extensively because the cost of energy in Europe and Asia is much higher. Having returned from a week in Paris, I can say that every apartment I visited had some type of clothes drying fixture … often over the bathtub but sometimes in the dining room or extra bedroom.

Clothes dryers were invented in Europe in the early 1800 with a barrel-shaped metal drum with holes, turned by hand over a fire. The first American dryer patent was issued to George Sampson in 1892. As dryers evolved they have  replaced the original dryer, a clothes line so if you're using a clothes dryer (you are), then take a few minutes to review these safety tips.

Reasons to Use a Clothes Line

With the new focus on saving energy and protecting the environment, many families are going back to the traditional clotheslines, at least during warm weather. According to Michael BlueJay, Mr Electricity, you can save more than 10% of your electric use if you hang up your clothes to dry. Here is where you can learn more about clothes dryer energy use …

While dryers are very simple machines, they should not be taken lightly. The U.S. Consumer Product Safety Commission estimates that in 1998, clothes dryers were associated with 15,600 fires, which resulted in 20 deaths and 370 injuries. Fires are caused by lint building up in the dryer or exhaust duct work. You also need to insure that your dryer is venting outside correctly as too often vents are simply directed to the attic, where dryer (and bathroom fans) can deliver far more moisture than your attic will vent properly, supporting mold growth.

Ideally most dryer vents take a straight path to reach an outside wall to minimize lint getting trapped which is a fire hazard that causes more than 14,000 fires a year. Every additional foot of venting and every turn add more risk because that's where lint gets trapped and doesn't get cleaned out frequently often enough because you don't see it.

Equally bad is when builders run dryer vents up to the attic but don't continue the vent to the outside. This allows the moisture from the clothes being dried to linger in the attic and support the growth of mold. If you're not sure where your dryer is venting, i.e. if the laundry room isn't on an outside wall, trace the dryer vent and make sure it is venting outside. If not, extend the vent and secure it to the soffit vent to insure the moisture doesn't remain in your attic.

There are many other problems related to dryer vents which should be addressed immediately.

To learn more about dryers, proper venting and/or making repairs yourself, here are additional resources you can review:

Get More Tips on Appliances