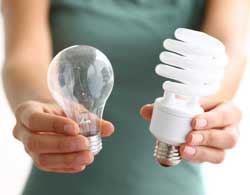 Compact florescent light (CFL) bulbs are gaining in popularity as they use 75% less energy than standard incandescent light bulbs. It's also easy to convert from today's incandescent light bulbs to CFLs. You don't have to buy any new light fixtures. When an existing bulb burns out, simply replace the old bulb with a new CFL bulb. Some countries have already mandated the use of CFLs (beginning in 2005) and the US will start to require CFLs at the end of 2011.

However CFLs contain mercury which makes their disposal more challenging. Home Depot has announced a CFL recycling program. Bring unbroken CFLs in a plastic bag and place in one of the designated bright orange collection units. Home Depot will coordinate the packaging, transportation and recycling of your CFLs.

Lots of people aren't happy with the law passed in 2007 governing light bulbs. While most people assume the law bans today's incandescent bulbs, it does NOT! The “lighting” law simple requires that all new light bulbs beginning in 2012 be at least 25 to 30 percent more efficient that today's light bulbs. That's because today's bulbs are very inefficient, losing roughly 90% of the energy they consume to heat … not light.  The law doesn't state which technology anyone has to pick, just that it be energy efficient. Consumers will still have lots of choices from energy-saving halogens, CFLs, LEDs, and even new and improved incandescent light bulbs.

CFLs also generate a lot of controversy because they contain mercury and need to be disposed of carefully (see information below). Environmentalists feel that we should wait for the cost of Light Emitting Diode or LED light bulbs with even greater energy savings, become affordable.

Don't be surprised by the variety of light bulbs at the store. Along with traditional bulbs, CFLs and LEDs … we're now starting to see some of the newer incandescent bulbs arrive on the shelves. Philips Lighting’s Halogena Energy Savers are expensive compared to older incandescent bulbs, selling for $5 apiece compared to 25 cents for standard bulbs but they're 30 percent more efficient and last 3 times as long. We also to recalibrate our expectations as a 70-watt Halogena Energy Saver gives off the same amount of light as a traditional 100-watt bulb.

Which Light Bulbs are You Using?

What To Do If You Break a Compact Florescent Lightbulb (CFL)

To clean up a broken florescent bulb (EPA recommended steps):

For a more detailed set of cleaning instructions, read the EnergyStar FAQs on Compact Fluorescent Light Bulbs (CFLs) and Mercury.

Get More Tips on Lighting & Fans