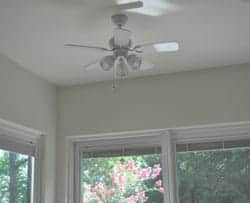 Most people use ceiling fans in the summer, creating a downdraft that causes a wind-chill effect. The skin evaporates slight amounts of water from the sweat glands, providing cooling through the skin's surface. The air is only moved, not cooled so you want to turn the fan off when there are no people in the room. You may find you can save HVAC (or air conditioning) costs by lowering your thermostat temperature a degree or two.

Air settles in layers with the warmest air at the top of a room. In the winter, ceiling fans can run counterclockwise to redirect warm air from the ceiling down the walls and into living spaces where there are people.

Why Using a Ceiling Fan Pays Off in Winter

While it might seem counter intuitive, there are multiple reasons for using your ceiling fan in the winter … because warm air rises, and it won't do you much good up at the ceiling. This is why many heating systems deliver warmed air at floor level, so you get the benefit as the warm air rises.

A general rule is to run the fan at a low speed so the warm air you want to move downward doesn’t cool off by the time it gets there. To test your fan, try both ways on the high setting. If you feel a breeze, this is the “summer setting”. In the winter, you will not feel any air being blown since the air is being pushed out and down the walls.

PS Don't forget to clean the paddles on your ceiling fans once you climb up there, LOL!