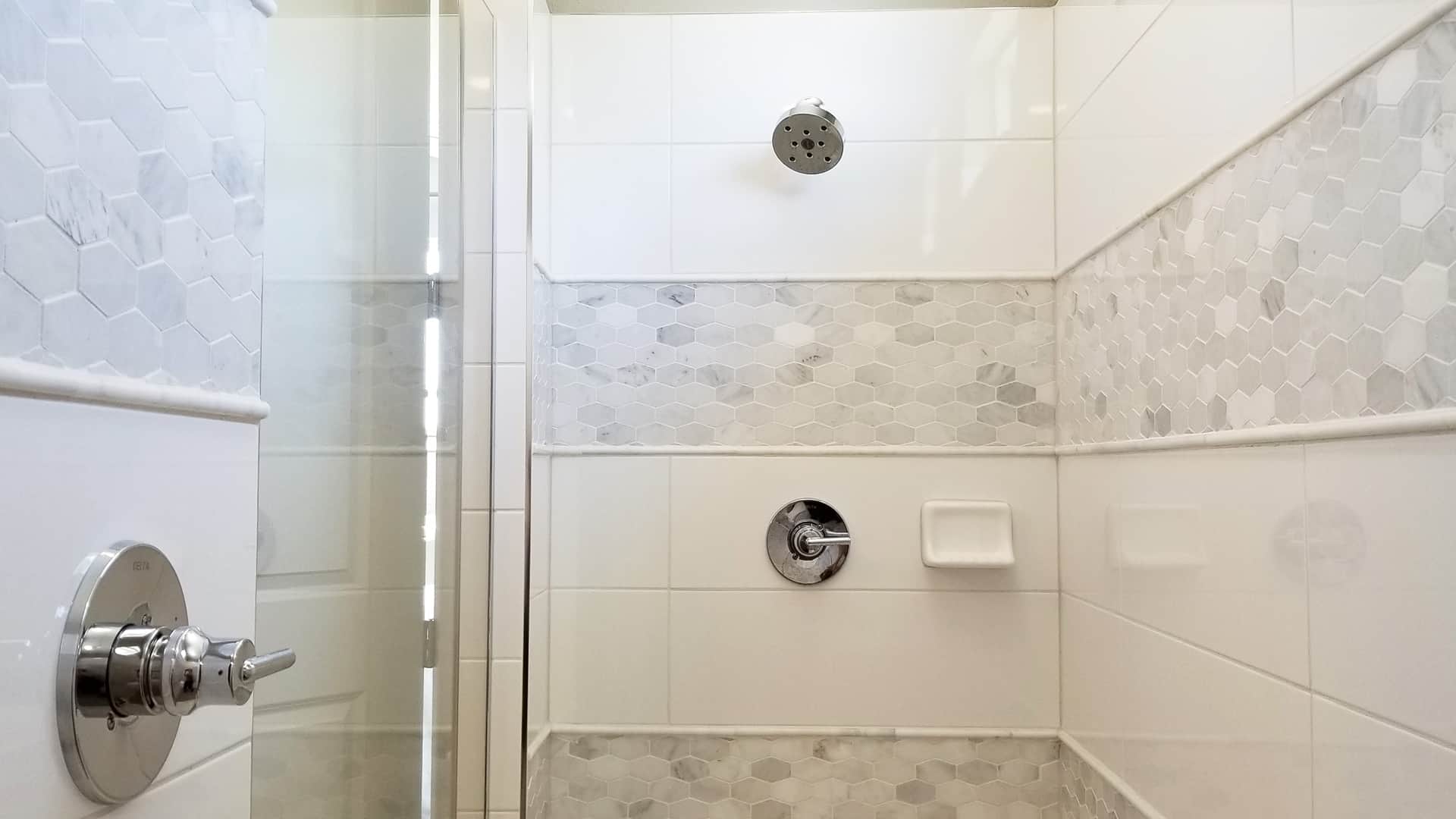 When you build a house, one of the most exciting things is picking your finishes. Your big choices are cabinets and counter tops in the kitchen and bathrooms, flooring, lighting, paint colors and tile for your shower/bathtub surround. Given that I love a long, hot shower in the morning, I happily paid for my dream bathroom and then watched in horror, as the inexperienced tile installer created one bathroom shower tile problem after another.

My decision to make this investment was based on the walk-in shower in the model home (shown above). While I liked the layout, I didn't want or expect my shower to be as elaborate. I wanted my accent band to be much simpler and knew I would wait to replace the plumbing fixtures after my closing to avoid the excessive builder markup on upgrades. Never would I have imagined that a professional tile installation could go so horribly wrong. 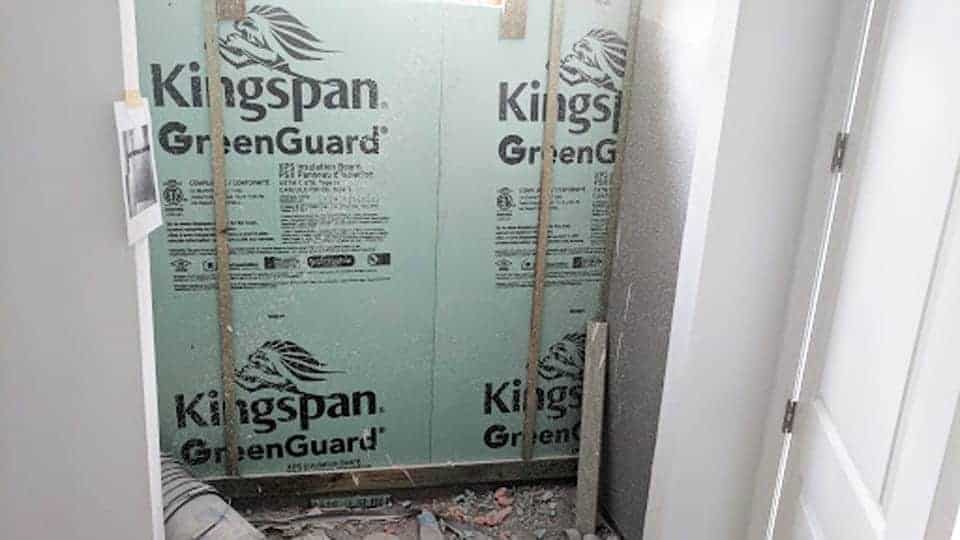 You can't use drywall behind shower walls because it's not waterproof. So we had to wait for …

To keep your walls as waterproof as possible, you start with plastic sheeting (6 mm). Over the plastic, there are several alternatives to drywall. Greenboard uses a moisture resistant paper while blueboard is designed for plaster adhesion. Cement board (builder used DensShield) is the best material as it's more durable, impact resistant and contains no wood which can be a food source for mold. Read Types of Drywall & Talking to the Pros to learn more.

When I had to go out of town before the tile was done, I had hoped to draw lines on the walls showing where I wanted the accent tile. In my absence, I had my older son take photos and he taped my email to the shower wall (seen on left). 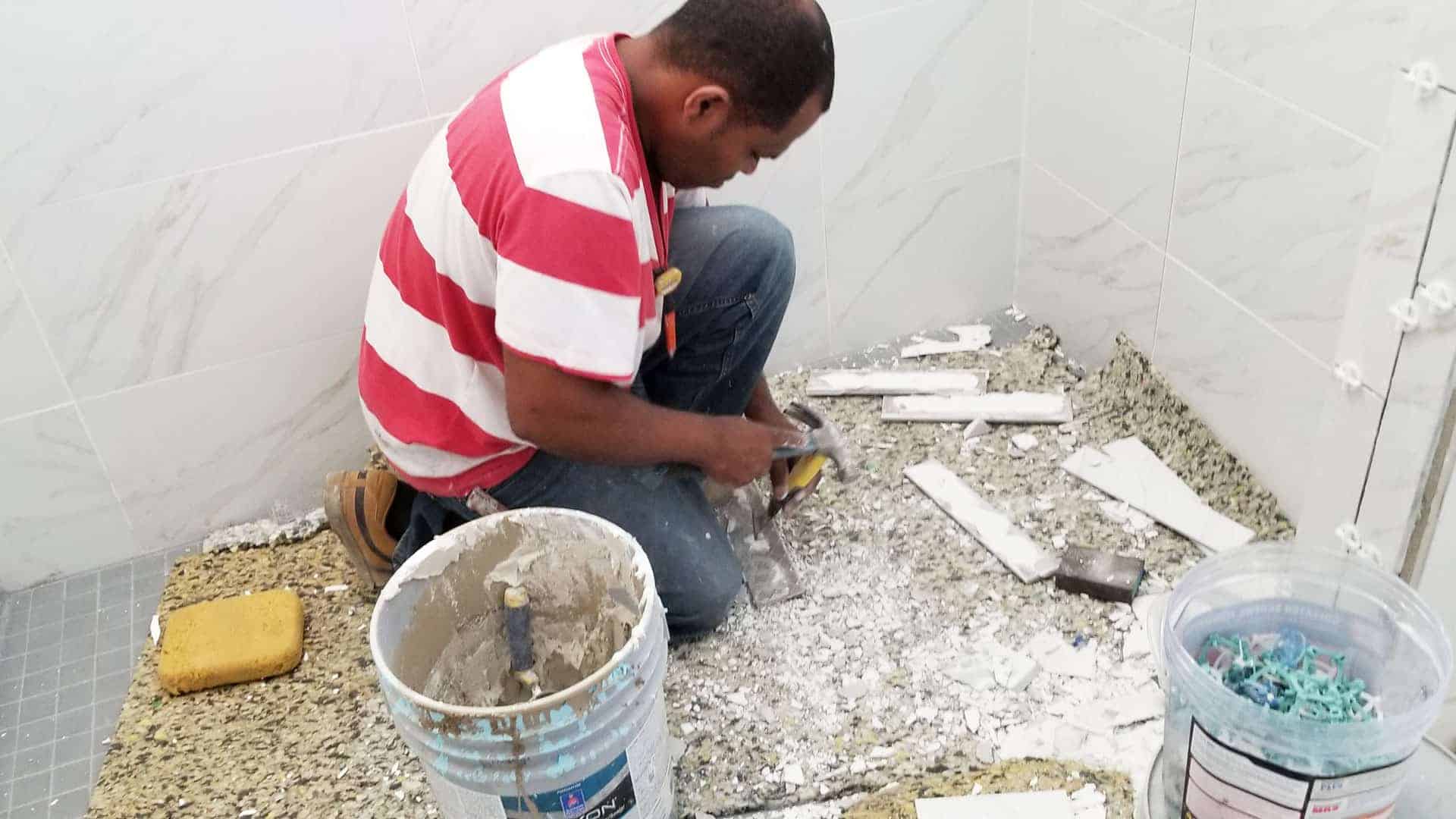 When you buy tile, it's common to get ten percent more for … oops, problems. With more than 2,000 sq ft of tile for my house, I asked my tile company (installing tile through entire house after closing, at less than half the price quoted by builder). They told me we needed 8% contingency and it will be interesting to see how much is left for the inevitable repairs.

With this inexperienced tile installer, lots of bad cuts meant he ran out of tile several times. First there weren't enough of the 1 x 2 large format tiles and they ordered two more boxes of tile (roughly 14 additional tiles). They didn't have enough tile to redo the seat in the shower and instead covered it with an ugly plastic composite. Finally while redoing the bullnose on the shower columns, they ran out of tile and had to chip off thinset (shown above).

So here are most of the bathroom wall tile problems I found, illustrated with photos …

Returned Saturday morning to explain that the tiles needed to be re-cut … but no one was there!

Checking to see if tile work had restarted, found a ladder and discovered …
how horrible the tile installation was going!

My complaint caused a construction pow wow on Friday (discovered after the fact)
… and Saturday morning the work was completed with builder bandaids.

They tried to distract me with … oh, aren't the bandaids better?
And in typical contractor fashion, told the walls weren't straight so they had to slope the tile?
But if you're serious about these problems, you fix the walls before you lay the first tile!

Wait, they needed a few more bandaids as the vinyl flooring didn't reach the shower …
Note: Vinyl as it's easy to rip out to replace with quality porcelain tile through entire house!

Composite (read plastic) bandaids are unacceptable when one has paid more than $1,200 for tile!
Sadly, the contractor could/should have identified the key problems before they started rather than leaving a novice to make a mess.
Now the tile has to be ripped out, new tile purchased and reinstalled!

PS Tile in the second bathroom will also have to be redone as no spacers used and grout job is … you guessed it, horrible!

Get More Tips on Building a House