Window parts are like a puzzle, with pieces fitting together to give you a tight, energy efficient view of the outdoors. Most window parts are functional, although some are decorative as the need they satisfied no longer exists. A good example are the grids (also called muntins) that used to hold small, individual pieces of glass together when it was harder (more expensive) to manufacture large pieces of glass.

Homeowners focus primarily on window size and styles (read Windows, Windows: How Big, How Tall?) with the most common window style in the US, the double-hung sash window. Today energy efficiency is also a factor to consider when buying windows, but it's not until you have to repair a window that you worry about which window parts need to be repaired or replaced.

Which Window Parts Are We Talking About?

It's really funny trying to research information about window parts online and here's why. The Windows operating system! It gets more interesting if you try to apply computer concepts to a physical window. While “close” seems to work well, try imagining how you could  “minimize” a window and to some degree, closing curtains or lowering blinds are quite similar to minimizing a window. So let's get back on track and explore the key components of a window and how it's constructed.

Window Parts Start With The Glass

The earliest windows were simply holes in a wall which might have been covered by animal hides, cloth or wood. Over time, glass was added to these openings to protect those inside from the elements while allowing natural light indoors. These early windows were made up of multiple pieces of glass, joined with lead in the same way that stained glass windows are made today.

Today's large windows weren't possible until industrial glass making processes were developed. What's fascinating is windows started with many window (glass) parts, and with manufacturing improvements, became one large piece of glass. For energy efficiency, multiple pieces of glass (double or triple pane) are now used and there are several options for the type of gas injected between the glass panels for higher efficiency. 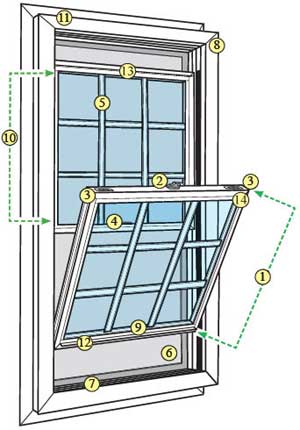 Today's window glass is held together with many window parts made from wood, metal or vinyl. Smaller window parts are combined to make larger, movable window parts called sashes. A double-hung window has 2 sashes and while they can slide up and down, it is possible to order windows with a fixed sash, to save money. Different window styles move differently, i.e. casement windows swing in and out and sliders, simply slide left or right.

Window Parts for Opening and Closing

Sashes sit inside the window frame, which is made up of more window parts that don't move. We could give you the name of each window part (WeatherMasterWindows describes window parts and buyer options) making up the frame but what's more important is understanding the purpose, to create an enclosure within which the window can operate (slide) smoothly for years of use.

Window Parts that Make Them Airtight

We might love the natural sunlight we get from windows but we won't can't enjoy them if they're drafty. A draft means air flow and with it, the heated (or cooled) air we paid for is lost to the outdoors, and you'll pay more to replace it.

By now you realize there are lots of window parts, and some of them aren't pretty. The last step to installing a window is trimming it out, inside and outside. Sitting just below the window is the sill on the outside, and on the inside it's called the stool (technically but most of us call both halves, the window sill). Inside there's an apron below the window stool to provide a nice finished look. Wrapping the other 3 sides of the window inside, are window parts known as window casing.

What window parts have you replaced? Other window questions?