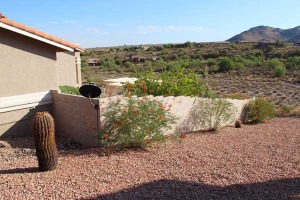 An arroyo, also called a wash, is a dry gulch or creek that fills with water after a heavy downpour. This can happen seasonally or occasionally after heavy downpours. That's why you need to understand where they are, and avoid them when a risk of flooding exists.

The term arroyo is generally used to describe sloped or mountainous terrain in desert climates. There are natural arroyos and those built to help control flooding.

How is the Arroyo Used

The arroyo is used to plan housing developments and minimize the risk of flooding. For example, in Fountain Hills, Arizona, houses are built along the ridges, leaving the arroyos undeveloped behind rows of houses (photo shown).

In rural communities, arroyos may be used for transportation routes. In urban areas, the arroyo is often used for parks and other recreational activities like ball fields, bicycle paths and equestrian trails. The idea is these areas can be flooded with minimal damage, and return quickly to their normal use once flooding goes down.

Get More Tips on Uncategorized